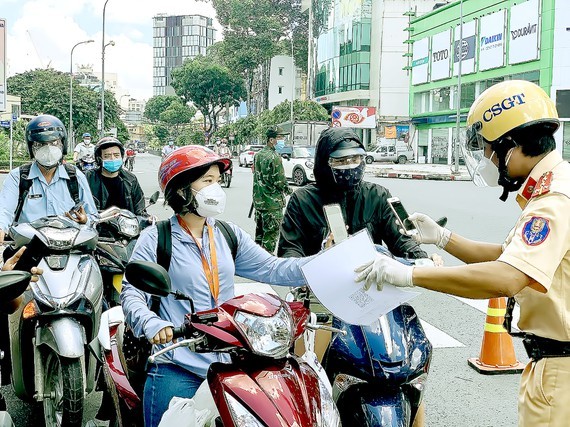 At fixed checkpoints around HCMC, vehicle users have to display their own QR codes for camera scanning or stop for a while to declare their travel purposes if not done already. Thanks to the help of on-site functional forces, people still feel at ease finishing that essential task.

However, since this declaration, either with the VNEID app or on paper, takes time, there are temporary congestions at certain checkpoints on major streets like Vo Thi Sau and Nguyen Thi Minh Khai in District 3. The police teams there have to work non-stop for hours to scan QR codes, give instruction to street users, and request people going out with unnecessary reasons to come back.

At the intersection between Nguyen Thi Minh Khai Street and Cach Mang Thang Tam Street, thousands of vehicle users passed by the checkpoint in one hour yesterday. Their QR codes were scanned by a camera using the software ‘Domestic Travel’, and their travel permits were checked manually by the police. Most of these people were the medical staff on duty, shippers, and citizens going to vaccination sites.

Similarly, at the intersection between Phan Boi Chau Street and Bach Dang Street in Binh Thanh District, travellers were also strictly checked. Only shippers and goods trucks with valid travel permits were allowed to pass.

Senior Lieutenant Colonel Le Manh Ha, Deputy Chief of Staff at the Municipal Department of Public Security, informed that the HCMC Public Security Department has installed several cameras at 115 checkpoints to automatically scan QR codes issued by VNEID app or the National Population Portal for travel declaration. In the upcoming time, more will be set up to speed up the task.

At the checkpoint on Nguyen Thi Thap Street of District 7, yesterday afternoon, vehicles from outside had to wait in a long line to have their travel permit carefully checked. However, residents in the district were checked faster.

The HCMC Department of Information and Communications had proposed to pilot the app ‘Y Te HCM’ in the three green districts of 7, Can Gio, and Cu Chi as well as in Saigon Hi-tech Park and HCMC Export Processing and Industrial Zones Authority after September 15 to support citizens in their inner traveling.

The department’s Deputy Director Vo Thi Trung Trinh said that since yesterday, the department has begun this piloting in certain places and is still waiting for more instruction from HCMC People’s Committee.