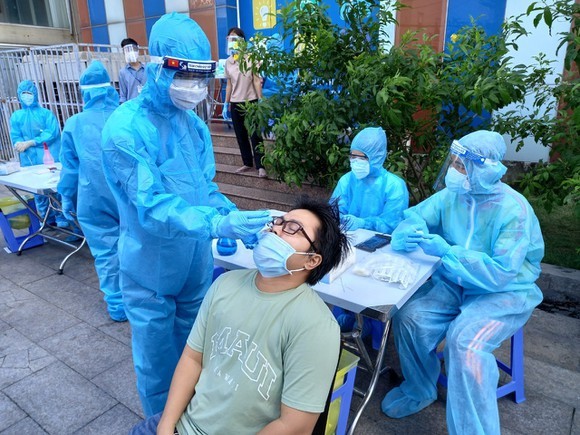 A medical worker takes test sample from a person
Accordingly, from now to September 15, all residents in the red, orange areas must be tested at least three times and once for the people in the rest areas or each household will be taken sampled at least twice.
The city authorities encouraged people to carry out the rapid Covid-19 antigen test by themselves.

After completing the second testing row for all those people living in the red and orange areas, the city districts will continue to carry out the rapid antigen test via pooling the sample from two to three people in a household or the pooled sample testing for SARS-CoV-2 using rapid RT-PCR Covid-19 test from the sample of the whole family members, tracking the positive samples by the rapid test with the frequency of once in every two or three days for the third row.

The representative specimen in the second row will be different from the first one to track the positive samples via rapid test or RT-PCR test with the frequency of once in every five or seven days.