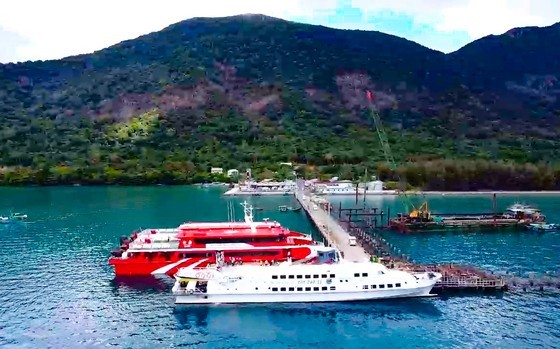 High-speed boats anchor at port due to bad weather.
Phu Quoc Express JSC has anchored their boats on Tran De-Con Dao and Con Dao-Tran De routes that depart at 7.30 am and 12.30 pm respectively, on September 27-29.

Mr. Do Doan Hoai Vu, a representative of Mai Linh Tay Do JSC operating high-speed boats linking Can Tho and Con Dao said that the service had to be stopped to ensure the safety of passengers and crews.
Various types of water transport carrying passengers between the mainland and Phu Quoc, Nam Du islands were temporarily suspended due to bad weather, starting from 6 am on September 27 until further notice, said Director of the Kien Giang Maritime Port Authority Tran Van Tai.
Passengers of canceled ferries and high-speed boats can get a full refund or choose another trip.
According to the Southern Hydro-Meteorological Station, the sea area in Kien Giang was forecast to have rain and thunderstorms on September 27, and saw big waves and rough seas. The wind blows in the direction from west to southwest with a speed of 30-40km per hour (levels 4-5), gusting at levels 6-7 (50-60 km/h).