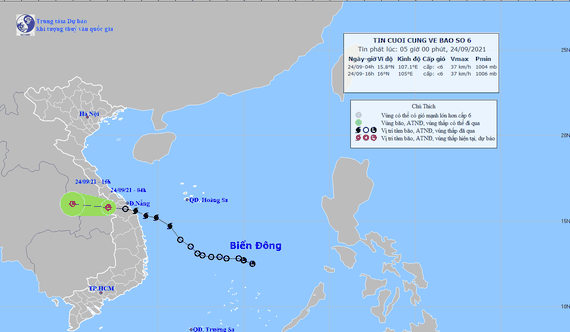 The path of the low-pressure zone
According to the National Center for Hydrology Meteorology Forecasting, as of 4 a.m. on Friday, the eye of the low-pressure zone was at around 15.8 degrees north latitude and 107.1 degrees east longitude in the Vietnam-Laos border area with a maximum sustained winds of 40 kilometers an hour. The Gulf of Tonkin is suffering from big waves and rough sea.
In the next 12 hours, the system is expected to move west-northwest at its speed of 15-20 kilometers an hour.

Dianmu, the sixth typhoon of this year’s hurricane season which downgraded into a tropical depression and bore down on the mainland provinces from Thua Thien- Hue to Quang Nam last night.
From 7 p.m. on September 23, thundery downpours blew up the roofs of houses and uprooted trees in Quang Nam and Quang Ngai Province. 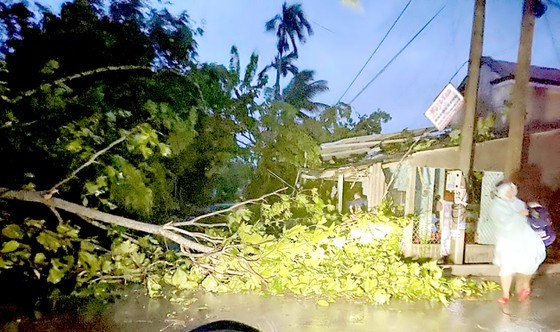 Thundery downpours blow up the roofs of houses and uproot trees

Chairwoman of the People’s Committee of Ly Son Island District, Quang Ngai Province Pham Thi Huong last night informed that trees were uprooted and ten roofs were blown away by the blustery winds. Around 300 hectares of onion and garlic crops have been facing huge damage.
Earlier, Director of the National Center for Hydrology Meteorology Forecasting Mai Van Khiem issued the warnings of medium-heavy rainfall along with risks of flooding, flash floods and landslides in Nghe An, Ha Tinh, Quang Tri, Thua Thien- Hue, Da Nang and the Central Highlands provinces due to the tropical storm.