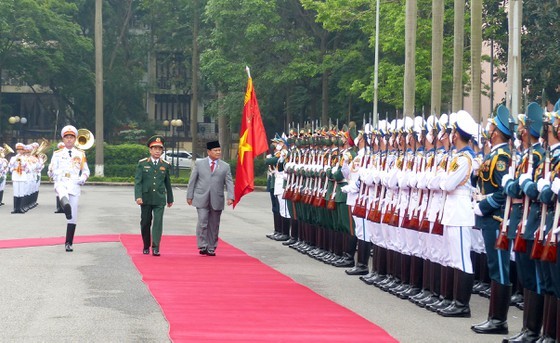 This morning, Politburo member, Deputy Secretary of the Central Military Commission and Minister of National Defense General Phan Van Giang chaired a ceremony to welcome Indonesian Minister of Defense Prabowo Subianto along with a high-ranking delegation of the Indonesian Defense Ministry for their official visit to Vietnam from May 12 to May 14.
This is the first visit of Minister Prabowo Subianto to Vietnam following the invitation of the Vietnamese Minister of National Defense after he was appointed as minister in October of 2019, contributing to promoting defense cooperation between the two countries in the coming time; and this is his first foreign visit after the Covid-19 pandemic has been under control.

The visit is in the context of a good strategic partnership and increasingly strengthened political trust between the two countries. Additionally, the two sides are concentrating on defense cooperation based on positive results.

On this trip, Minister Prabowo Subianto will have a courtesy visit to Vietnamese President of State Nguyen Xuan Phuc and join in some activities of the 31st Southeast Asian Games (SEA Games 31) in the country.

Right after the ceremony, Vietnamese National Defense Minister Phan Van Giang and his counterpart Prabowo Subianto attended a talk. At the talk, the two sides agreed on a high assessment of defense cooperation between Vietnam and Indonesia. On the foundation of the Memorandum of Understanding (MoU) between the two countries on strengthening cooperation between defense officials, related signed activities in 2010, and a joint vision statement on defense cooperation in the period 2017-2022, the two parties have effectively coordinated to organize dialogue, consultation and delegation exchange programs, training sessions for naval forces, coast guards, and cooperation programs between research institutes, and so on.

Particularly, from the end of 2019 up to now, although the Covid-19 pandemic has affected the cooperation activities implementation, the two sides have maintained and paid special attention to the national defense cooperation, and achieved various practical accomplishments, remarkably, dialogue mechanism maintenance, cooperation under the online form, signed cooperation documents between naval and coast guard forces of the two nations and coordination in term of staff training.

The two ministers also agreed that the two sides will continue to effectively implement cooperation contents in the field of national defense signed by the Governments and the Ministry of National Defense of the two countries in the upcoming time; to bring into play the effectiveness of dialogue mechanisms; promote the exchange of delegations at all levels; strengthen cooperation between naval and coast guard forces of the two countries, education and training, defense industry, rescue, military medicine, involvement in United Nations (UN) peacekeeping missions and so on.

Two ministers also discussed the international and regional situations that the two sides have concerned about, including the East Sea issues.

Minister Phan Van Giang proposed that the two countries' maritime law enforcement agencies strengthen coordination in exchanging information and handling issues arising at sea based on conformity with the strategic partnership between the two countries and the spirit of humane treatment toward fishermen. Besides, Minister Giang respectfully invited leaders of the Indonesian Ministry of Defense to attend and send national defense enterprises to join the Vietnam International Defense Exhibition which is expected to take place in December of 2022.
Some photos are captured at the welcome ceremony for Indonesian Minister of Defense Prabowo Subianto and a high-ranking delegation of the Indonesian Defense Ministry this morning: 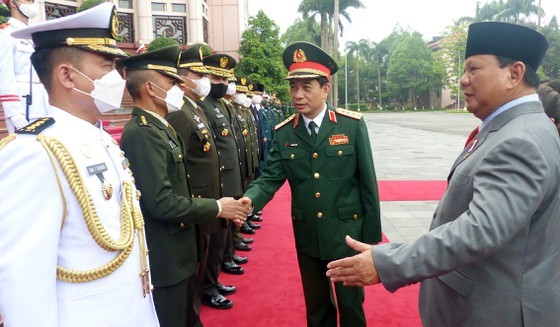 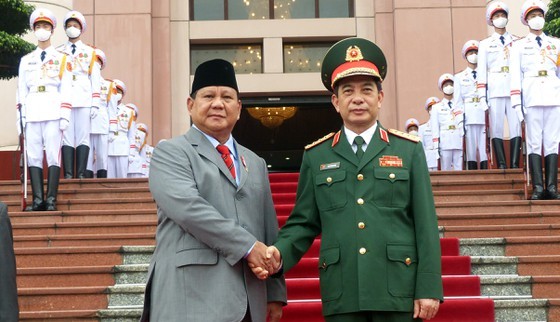 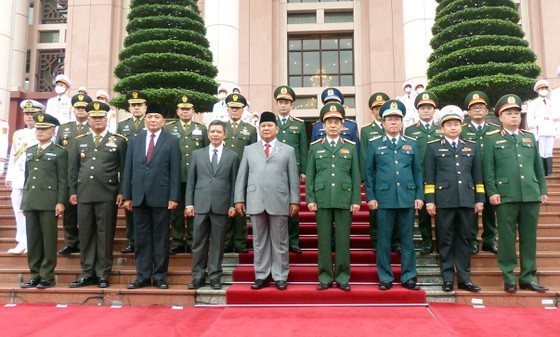 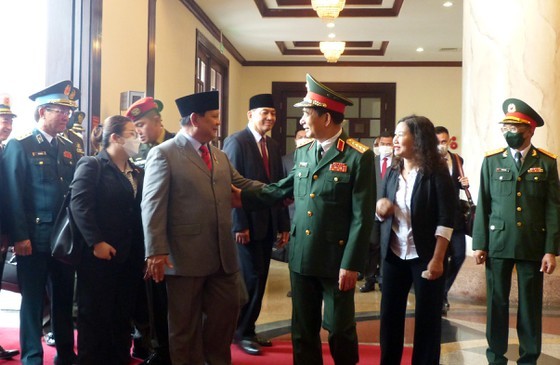 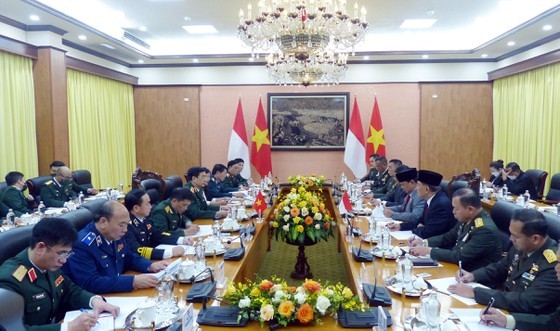