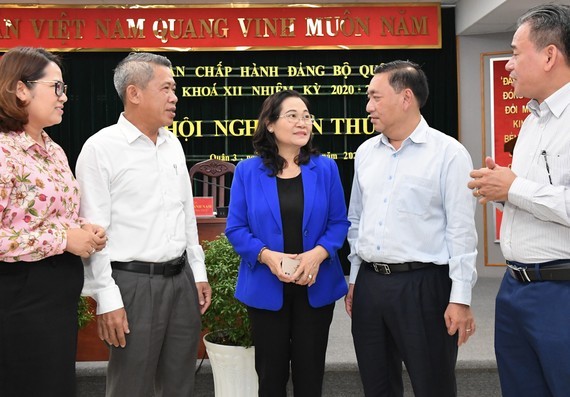 Chairwoman of the HCMC People’s Council Nguyen Thi Le talks with leaders of District 3 at the meeting.
She delegated the district’s administration to focus on supervising and implementing dengue prevention and control measures, ensuring the availability of enough health workers for diseases, upgrading old apartment buildings and continuing the reform of administrative procedures.

District 3 needs to carry out appropriate personnel arrangement plans for the next terms, support and monitor the work performance of assigned officials and self-nominated candidates in their new roles.
In the first six months, the total state budget collection of District 3 was estimated at VND3,360 billion (US$144 million), reaching 65 percent of the year’s target. The disbursement of public investment capital gained nearly 46 percent of the city’s budget and 52.8 percent of the district’s supporting capital source. There were 1,693 newly established enterprises. 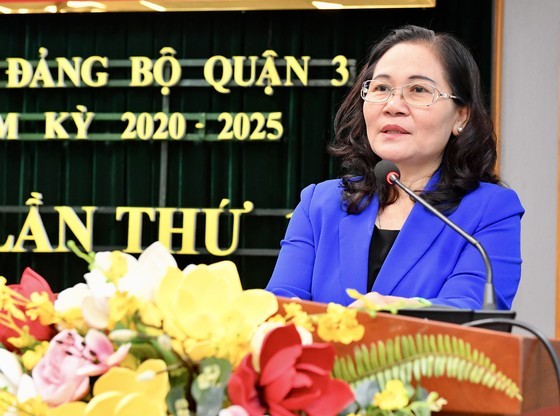 The Executive Committee of the Party Committee of HCMC’s District 3 organizes its 14th meeting of the 2020-2025 tenure on July 1.
The Metro Line 2 which runs across districts 1, 3, 10, 12, Tan Binh and Tan Phu has a total length of 11.3 km, including a 2km elevated section and 9.3km underground, and 11 stations including 10 underground and 1 elevated station. The project is scheduled to be built in 2026.

Nearly 99 percent of site clearance in District 10 and Tan Binh where the metro line No.2 will run across has been completed. The site clearance for the whole route currently reaches 78.61 percent. Specifically, 474 out of 603 households affected by the project have handed over their land. The progress of site clearance has been slowly carried out due to districts’ compensation adjustments.