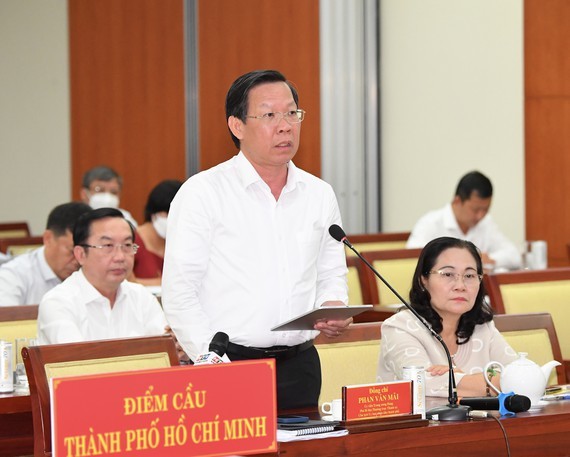 Chairman of the People’s Committee of HCMC Phan Van Mai speaks at the conference.
The statement was made at a virtual conference on the implementation of the Politburo's Resolution No.06-NQ/TW dated January 24, 2022 on planning, construction, management and sustainable development of urban areas in Vietnam to 2030 with a vision to 2045” that was held by the Party Central Committee's Secretariat on May 18.

The video conference saw the presence of Politburo member and standing member of the Party Central Committee’s Secretariat Vo Van Thuong, Chairman of the Party Central Committee's Economic Commission Tran Tuan Anh, Head of the Central Propaganda and Education Department Nguyen Trong Nghia and Deputy Prime Minister Le Van Thanh.
Participants located in HCMC accessing the live meeting included HCMC Party Committee Secretary Nguyen Van Nen, Chairman of the People’s Committee of the city Phan Van Mai and Chairwoman of the municipal People’s Council Nguyen Thi Le.
Speaking at the event, the city’s Chairman said that HCMC is an economic, social and cultural center of the country. Urban planning, management and sustainable development is an important issue not only for the city but also for the country. Resolution No.6 has a great significance, providing solutions to help solve problems of urbanization in HCMC and adjacent regions in the network of urban areas across the country.
The Standing Committee of the municipal Party Committee has delegated the Party Civil Affairs Committee of the HCMC People's Committee and research units to study and carry out the resolution N.6 associated with the general planning for HCMC and Thu Duc City development until 2040 with a vision to 2060 in accordance with orientation for large-scale urban development and multi-center city; and implement urban areas of the East, Northwest and South of the city that will be developed into centers of finance, trading, services, digital transformation and creative startup in line with the Resolution of the 11th Municipal Party Congress.
The city has paid attention to urban and transport infrastructure, digital infrastructure, especially social infrastructure, he noted.
The city has carried out 11 projects of anti-flooding programs, solid waste treatment, transport infrastructure development, urban metro lines, industrial infrastructure, service infrastructure, smart city building, communication development infrastructure, housing development, tree coverage, and urban lighting system, reduction of environmental pollution. In which, the southern economic hub will focus on developing urban infrastructure, especially transport and service infrastructures.

Chairman of the People’s Committee of HCMC Phan Van Mai proposed that the city will soon receive special policies and mechanisms to attract strategic investors to develop railways and waterways connecting the city with seven neighboring provinces and cities.
He hoped that the construction of the HCMC-Can Tho high-speed railway project linking the city and Mekong Delta localities will be implemented as soon as possible. Besides, the city will be granted special mechanisms to attract investment in projects of digital infrastructure, transport infrastructure and urban infrastructure.
The city has also carried out the low-income housing project providing one million houses to meet the housing demand of workers and laborers who are living in substandard rental housing and old apartment buildings, and an urban embellishment program of greening up its urban areas, installing lighting system; built plans on policies and mechanisms to draw investment to develop social infrastructure referring to community demands for health, education and entertainment; and implemented spiritual care program for citizens, poverty alleviation program ensuring social security for the needy.

Regarding urban economic development, he emphasized that HCMC has continuously studied solutions for developing service economy, tourism and night-time economy, digital economy, sharing economy associated with industry and service, the establishment of riverside and coastal urban areas, and cities.
Additionally, the city has gained achievements after one year of implementing the Resolution No.131/2020/QH14 (NQ131) on organizing urban administration in HCMC and plans to submit a proposal to the Government on granting special mechanisms at the soonest to create advantages for Thu Duc city’s development at the end of this year.
The city’s Chairman also expressed his wish for strengthening the construction of integrated planning and general planning, the early release of special mechanisms or pilot plans attracting strategic investors and urban developers to implement new urban growth models and urban embellishment projects.
HCMC has more than 10 districts with a population size that is three- eight times larger than the usual number of districts in the country of about 140,000 people. Therefore, the city needs a management mechanism that is more appropriate.
The city has also carried out a project of turning five suburban districts namely Hoc Mon, Binh Chanh, Nha Be, Cu Chi and Can Gio into urban districts from 2021-2030.