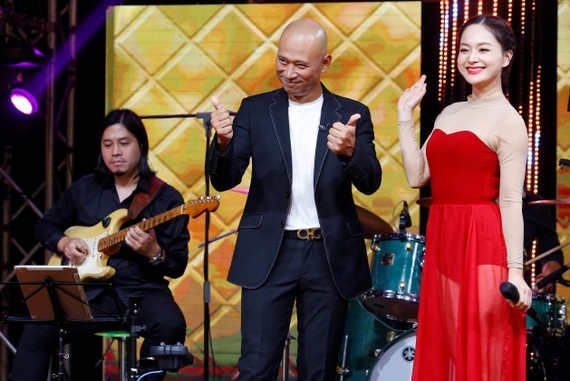 Actress Lan Phuong  (R)
Additionally, VTV decided to suspend the broadcast of TV series, including “Huong Duong Nguoc Nang” (The sunflower on the opposite side of the sun) and "Moscow in the leaf changing season" starring actor Hong Dang.

According to Assoc. Prof. Dr. Le Anh Tuan, Director of Vietnam National Academy of Music, musician Ho Hoai Anh who is currently a lecturer in the academy has been suspended from work under a decision launched in an urgent meeting between the Vietnam National Academy of Music and the Ministry of Culture, Sports and Tourism.
The Majorca Daily Bulletin previously reported that Spanish police arrested two famous Vietnamese artists for allegedly raping a 17-year-old British girl on Mallorca island. The two have been released on bail and banned from leaving Spain. Spanish authorities have confiscated their passports and asked them to wait for the decision.

By Mai An, Khanh Nguyen – Translated by Kim Khanh