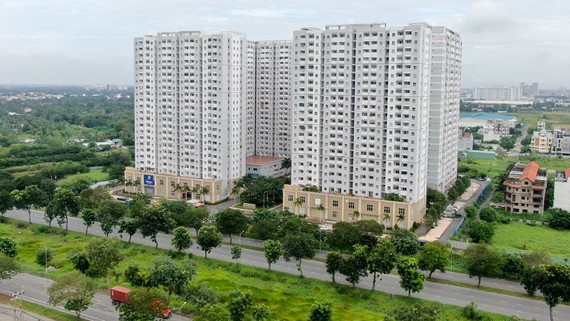 According to a report by the Department of Construction of Ho Chi Minh City, in the past five years, the city only had about 20 social housing projects put into use with over 15,000 apartments. This number remains modest compared to the demand for affordable housing.

One of the large-scale social housing projects that have been put into use recently is the HQC Plaza Social Housing Apartment Complex, located in Nguyen Van Linh Boulevard in An Phu Tay Commune of Binh Chanh District. The project has 1,735 apartments and utilities, such as a commercial center, school, kindergarten, polyclinic, supermarket, playing ground, and parking area. The area of each apartment here is from 54 square meters to 68 square meters, with the price ranging from VND800 million to VND1 billion per unit.

Mr. Truong Anh Tuan, Chairman of Hoang Quan Real Estate Joint Stock Company (HQC), said that most customers buying apartments here are State workers. With a relatively low selling price and policies on loans and interest rates, the project was sold out quickly. Another project is the HOF-HQC Social Housing Project in Ho Hoc Lam Street in Binh Tan District, with a scale of 464 apartments invested by the HCMC Housing Development Fund, which has also been completed and put into use at full capacity.

Notably, in 2020, the number of affordable apartments plummeted heavily, accounting for only 1 percent of total housing products. In the first quarter of 2021 alone, the proportion of high-class, luxury, and super-luxury housing accounted for 59 percent, and mid-end housing accounted for 41 percent. However, there were no affordable apartments on the HCMC real estate market. According to the HCMC Real Estate Association, the structure of housing products is a clear sign of "supply-demand mismatch". The development of the real estate market is unbalanced and unsustainable due to the lack of affordable housing and signs of an oversupply of high-end housing.

Ten years for completion of the project procedures

Or the Nam Ly social housing project in Phuoc Binh Ward in District 9 (which is now Thu Duc City) invested by Thao Dien Real Estate Company covering an area of 4,557 square meters is expected to build a 26-story apartment building and one basement, with a total of 291 apartments. Since 2009, the company made a written request to self-invest or invest as a secondary project. It was not until 2017 that the city decided to approve the investment and the investor with the expected completion time in the third quarter of 2018. However, the Construction Management Department under the Ministry of Construction later announced the results of the appraisal of the basic design of the high-rise apartment building of the project. By the beginning of 2019, the Department of Construction of HCMC had a document on allocating land for project implementation to the company. Thus, it took the company nearly ten years for the procedures of a project.

In a recent meeting with the leaders of the District Party Committee and People's Committee of District 7, Mr. Nguyen Van Nen, Politburo Member, Secretary of the HCMC Party Committee, said that someone asked him that when the pandemic was under control, what would the first thing to do, and his answer was to build social housing. According to many experts, this is a completely right and humane decision. With this policy and determination, they hope that HCMC will remove obstacles that are hindering the development of social housing for low-income people in the coming time.

Over the years, his company has invested in about 7,000 apartments to serve the low-income customer segment, and the products are not enough to meet the demand. However, many investment procedures for social housing projects remain cumbersome, causing businesses to lose interest when participating in this segment. For instance, some projects of his company neither use public land nor State budget capital, but they are still required to be audited. There were irrationalities that the company petitioned many times, and the city leaders personally directed relevant departments to consider and solve them. However, it took several years for them to be resolved.

Specifically, the Tan Kien Social Housing Project in Binh Chanh District was stagnant because of the land-use coefficient and population density. The company had petitioned many times, and it took many years to get the written approval for adjustment. Nevertheless, the file has been lying in Binh Chanh District for 4-5 months. He hoped the procedures would be completed after the Covid-19 pandemic. Another project is the Le Thanh An Lac social housing project for rent in Binh Tan District, which had been under construction since 2017, with a scale of 930 apartments. So far, the project has been completed and put into use. However, some problems related to land-use fees and taxes have not been resolved, although the company has repeatedly petitioned.

By Do Tra Giang, Luong Thien – Translated by Thanh Nha