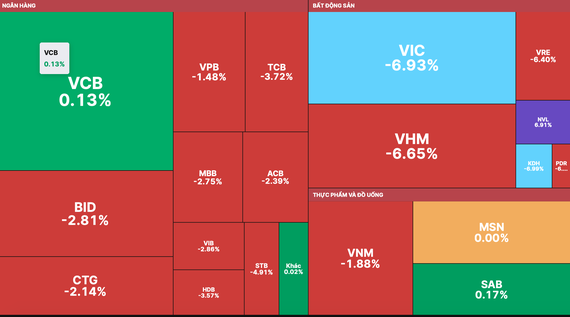 Vietnam’s stock market opened the first session of the week with a good gain, although blue-chip stocks, such as VHM, VIC, VRE, VNM, CTG, and KDH, showed signs of weakening, sliding by 0.5-2 percent.

The rising midcap stocks were the driving force in the morning session. Especially, seafood stocks rallied robustly. Of which, IDI, ANV, and ACL hit the ceiling; other stocks, such as CMS, VHC, and ASM, climbed by 5-6.5 percent.

The VN-Index sometimes regained the 1,060-point mark. However, entering the afternoon session, the market cooled down quite quickly. Large-cap stocks continued to decline, putting great pressure on the market, as VIC and KDH fell to the floor.

Towards the end of the session, the electricity board was quickly flooded in red as the selling pressure spread throughout the market. Blue-chip stocks continued to decline sharply in the afternoon session, with VHM plunging 6.65 percent, VRE slashing 6.4 percent, CTG dropping 2.14 percent, TCB cutting 3.72 percent, MBB reducing 2.75 percent, STB declining 4.91 percent, and HDB sinking 3.57 percent, dragging down the VN-Index sharply.

The most sensitive stocks in the market were securities, with many stocks hitting the floor price, such as VCI, CTS, FTS, and VND. Other securities stocks also lost by 5-6 percent, such as SSI, BSI, VIX, and HCM.

In the group of steel stocks, HSG fell to the floor, NKG lost 6.4 percent, and HPG shrank 3.1 percent.

The strong selling in the afternoon made the liquidity increase strongly. The total trading value reached nearly VND18.2 trillion, with the HoSE accounting for VND16.4 trillion.

Although foreign investors sold shares heavily in this session with more than VND1.3 trillion on the HoSE, they still net bought nearly VND335 billion as their total buying value on the HoSE was more than VND1.65 trillion.