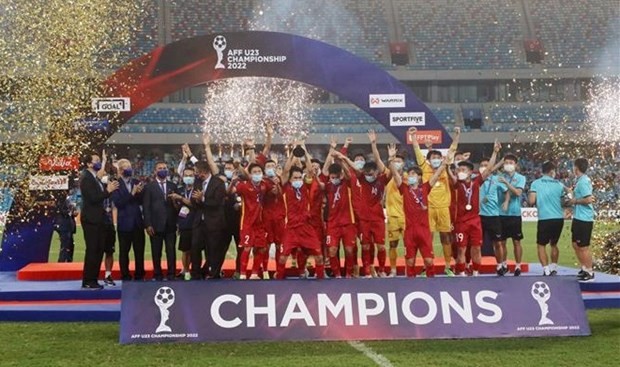 Vietnam triumph at the 2022 AFF U23 Championship (Photo: VNA)

Vietnam defeated Thailand 1-0 at the final to earn the title on February 26, winning over the regional rivals twice in the tournament.

The team encountered various challenges as many members contracted Covid-19. However, head coach Dinh The Nam and the players surmounted difficulties to become eventual champions and keep a clean sheet, which no team has ever achieved in the regional football event. VFF Acting President Tran Quoc Tuan hailed the squad’s victory and expressed his pride in the young footballers. 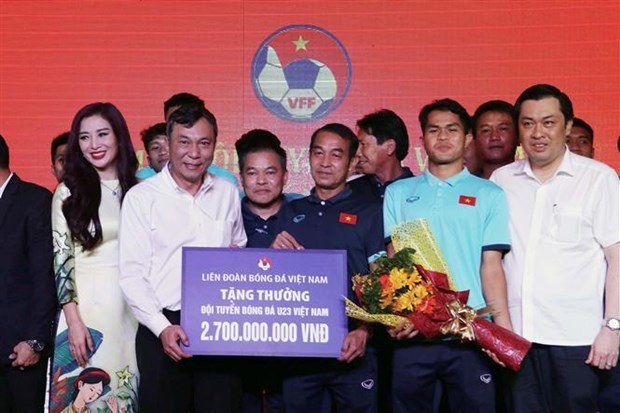 It is the first time that Vietnam has triumphed at the regional U23 Championship. The tourney helped the players sharpen their skills, techniques, mettle and competitive spirits, contributing to the development of Vietnam’s football, he added.

Team captain Dung Quang Nho said each member of the team did his utmost in every match, voicing his gratitude to football authorities, fans and Vietnamese Cambodians who supported the team. 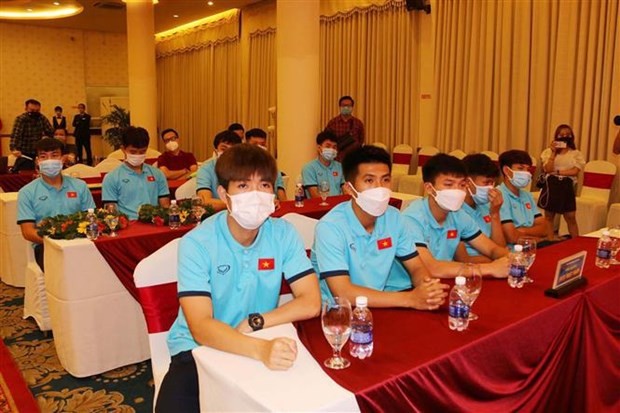 U23 team's players at the welcome ceremony (Photo: VNA)

At the welcome ceremony, the VFF presented VND2.7 billion (US$118,320) to the team, which was also showered with bonuses from firms and sponsors.

Vietnam scored nine goals in total, the highest number throughout the tournament. They also bagged the largest victory, scoring seven goals against Singapore. Earlier, President Nguyen Xuan Phuc and Prime Minister Pham Minh Chinh congratulated the team for overcoming challenges, especially Covid-19, to seize victory and qualify for the final of the 2022 AFF U23 Championship.
Vietnamplus

Monday, January 23, 2023 13:00
One of the remarkable sports events in 2022 is that two stars of Vietnamese men's and women's football started their new career stage in Europe.