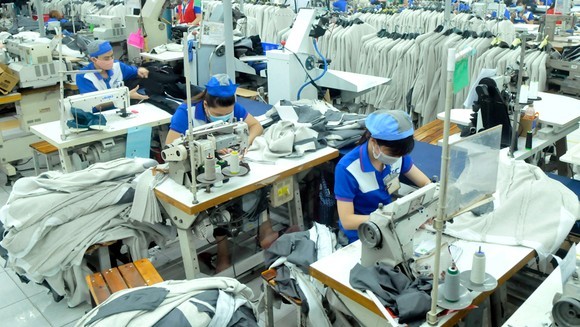 To achieve the result, textile and garment enterprises have made great efforts to cope with the challenges of the market.

The enterprises did not depend on the five traditional export markets, including the US, Europe, Japan, the Republic of Korea and China, but also expanded the exports to Russia and some other countries.

In Europe, they not only focused on a few large export markets such as Germany, France, Spain and the UK as in the past, but also expanded the exports to other countries in the EU.

In addition, many businesses have eyed Mexico and other countries in Africa.

Among textile and garment exporting countries in the world including Bangladesh, India and China, Vietnam had the earliest opening-up policy for normal operation after the Covid-19 pandemic.

Therefore, in the first six months of the year, Vietnam's textile and garment industry had a large number of orders and good business results.

Vu Duc Giang, Chairman of the Vietnam Textile and Apparel Association (VITAS), said in the first half of 2022, the textile and garment industry gained growth in export orders, but entering the third quarter of 2022, the market began to see signs of a decrease.

The export order reduction was due to lower demand in major export markets like the US and the EU. High inflation in those markets caused people to reduce their spending significantly. In which, apparel was a commodity seeing strong cuts.

Meanwhile, markets that are important trade partners of Vietnam such as China, Japan, and Taiwan are still applying strict measures against the Covid-19 pandemic. That affected supplies of raw materials, auxiliary materials and the consumption of textile products from Vietnam.

To cope with those challenges, businesses rearranged working hours to ensure stability for workers.

Enterprises in the textile and garment industry are still able to overcome the challenges in the fourth quarter, but difficulties are likely to continue until the first quarter of 2023, Giang said.

Tran Nhu Tung, Chairman of the Thanh Cong Textile – Investment – Trading JSC, said almost all countries exporting textiles to the US and EU markets have experienced a decline in orders due to high inflation and lower demand for apparel products.

According to Tung, for companies focusing on these two markets, they faced a large decline in production and business. Meanwhile, firms expanding exports to other markets, like Thanh Cong, saw a softer decline than others.

Thanh Cong saw a reduction in orders larger than expectations, but it was not too much. In the first nine months of the year, the company has fulfilled 80 percent of the revenue plan and 85 percent of the after-tax profit plan, he said.

According to VNDirect Research, the textile and garment industry will be brighter in the first quarter of 2023 because the export tariffs on some kinds of Vietnam's textile and garment products to the EU market will be reduced by 2-4 percent thanks to the EU-Vietnam Free Trade Agreement (EVFTA).

Therefore, some local garment enterprises exporting suits, shirts, pants and skirts to the EU such as Song Hong Garment, May 10 and Viet Tien, will enjoy more benefits from the EVFTA.