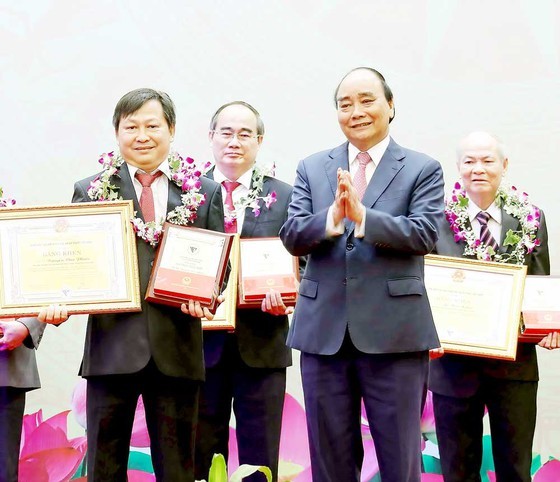 President Nguyen Xuan Phuc awarded the title of Typical scientific and technological intellectuals and the Certificate of Merit from the Vietnam Union of Science and Technology Associations to outstanding intellectuals (Photo: VNA)

The ceremony honored 106 typical science and technology intellectuals, including 68 people with academic titles, degrees from associate professor, doctorate or higher, 20 masters, 18 bachelor and equivalents. Amongst them, two are labor heroes consisting of 16 women, and 90 men.

Those selected for the honor are intellectuals working in institutes, centers, research institutions, universities, enterprises, or agencies of industries, fields, localities or in the VUSTA system for 10 years or more. They have a reputation in their field as well as have many practical and effective contributions to the sector’s development which have been recognized by society. They were nominated by their agencies or organizations.

President Phuc added that the 13th Party Congress once again emphasized the need for science-technology development and innovation as a strategic breakthrough for the country, especially in the context of the digital revolution taking place strongly across the world.

Furthermore, according to the President, the title ‘Typical Science-Technology intellectual’ not only brings pride to the person himself and his family but also becomes a great honor and responsibility for the honoree. VUSTA members to continue to pay attention to and do better the work of gathering, uniting, and promoting the creativity of the national team of science and technology intellectuals.

President Nguyen Xuan Phuc said that the fourth industrial revolution has opened up opportunities for Vietnam to shorten the gap and accelerate its development compared to the world. In that context, a team of science and technology intellectuals has been pushed to work harder to create more value for life from their research and inventions.

Additionally, VUSTA and its members should better connect with scientists, and build great solidarity to contribute to the successful implementation of national development goals in the new period.

The President also suggested that the party committees, authorities in all districts, ministries, and branches pay more specific attention to scientific activities so that VUSTA and scientists can make more contributions to the development of the locality in particular and the country in particular.

The President hoped that the success of today's honored scientists will inspire and create a spreading momentum, promoting the growing team of Vietnamese science and technology intellectuals, contributing more to the country’s development.

Innovation apply suitable for each province, city in Vietnam

Vietnam needs to have breakthroughs in digital transformation

Ten outstanding science and technology events in Vietnam in 2022