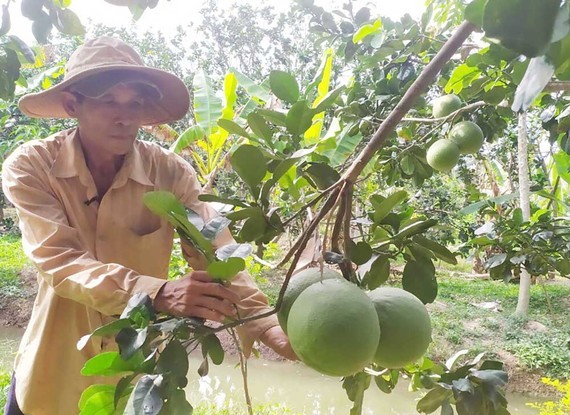 In these recent weeks, many gardeners in Tan Chau town of An Giang Province have enjoyed a bumper harvest of Hoa Loc mango and acacia mango. With 3.2ha of mangoes, farmer Chin Tuoi in Vinh Xuong Commune in Tan Chau town is harvesting acacia mangoes and selling them to traders in the garden at the price of VND8,000-VND14,000 a kg; he was so happy because he can earn a profit of several hundreds of millions of Vietnamese dong.

Dozens of gardeners in Vinh Xuong Commune are also harvesting Hoa Loc mangoes and selling them to traders for VND 30,000 a kg. The yield of Hoa Loc mango is from 5-6 tons per hectare; therefore, with the present prices, many gardeners have made significant profits.

Not only fruit growers in An Giang Province but their peers in Dong Thap Province are also making strides in approaching mango production associated with growing area codes to compete in the domestic market as well as export.

According to Mr. Le Quoc Dien, Deputy Director of Dong Thap Province's Department of Agriculture and Rural Development, the province increased cultivation of mango both to remove technical bottlenecks and increase the fruit value chain and high-tech processing to increase the value of the agricultural produce.

In addition, many farmers in the Mekong Delta are focusing on production towards VietGAP and GlobalGAP standards to export to China and other tough markets. Recently, growers in the region have had new opportunities when pomelo was licensed to enter the US market.

The agricultural sector in Tien Giang has formed a concentrated fruit-growing area with large output to supply the market. For instance, more than 120ha of pomelos are planted according to VietGAP standards in Tan My Chanh Commune in My Tho City and all fruits will be sold to an enterprise. Currently, local authorities are encouraging people to switch to growing pomelos according to VietGAP standards, high technology for export.

It is expected that the first batch of green-skinned pomelo grown in Ben Tre Province will be exported to the US market at the end of November 2022. According to Ms. Nguyen Thi Hong Thu, Director of Chanh Thu Fruit Import Export Group Company in Cho Lach District of Ben Tre Province, the company and five pomelo production cooperatives spent five years growing the fruit according to VietGAP standards.

It is expected that the company will export about 40 tons of pomelo to the US market. Thus, Ben Tre green-skinned pomelo is the first fruit of the Mekong Delta to be exported to the US market. Previously, mango, longan, litchi, dragon fruit, rambutan and star apple were also exported to fastidious markets in Europe.

According to Mr. Lam Van Linh, Deputy Director of the Plant Protection Department of Ben Tre Province, building the planting area code is a business's survival in the coming time to meet the technical barriers through quality standards. Good agricultural practices and clear planting area codes will help increase the opportunity to export fruits to many countries.

The Ministry of Agriculture and Rural Development reporter that in the first 10 months of 2022, the export turnover of main agricultural products reached over US$18.8 billion, up 7.2 percent. There are 8 products and product groups with an export value of over $2 billion, of which the fruit group reaches nearly $2.8 billion.