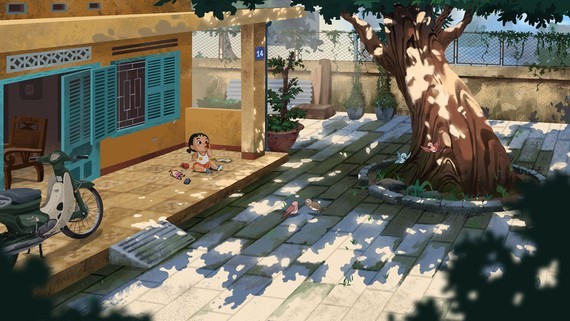 A scene in U Linh Tich narrative

Cultural products include newspapers, books, CDs, DVDs, paintings, and ceramics. Kim Dong Publishing House has just introduced to readers the second publication, after the first Wild Chang - Bear in the comic series Chang Wild is Wild Chang - Elephant by author Trang Nguyen and artist Jeet Zdung. The comic series was honored with the A prize at the National Book Awards in 2021; moreover, the series Chang Wild - Bear was bought by many publishers around the world for distribution such as Pan Macmillan (the UK), Penguin Random House (USA), Bookdream (Korea), Jieli (China), Ayrinti (Turkey)…

Additionally, Dung la Tet (That’s a new year) picture book of writer Bui Phuong Tam of Kim Dong Publishing House was sold and translated into German, Swedish and English which is being released in the US. Many of Lionbooks' picture books such as Don Tet ve nha ( Going home for Tet) and Dung dinh trang di ban (Going home for the full moon) have been copyrighted to many countries in English, German, and French.

In the field of literature, poet Tran Quang Dao with his poetry book Nhan trang ( Ring of the Moon) with English name The Moon Ring, late writer Xuan Duc with the novel Nguoi khong mang ho (The man without a surname), 12-year-old author Dang Ha Linh with the novel Lua chon giua hai the gioi (Choosing between two worlds ) with the English name The Strongest Magic of All were all published globally by Canada based Ukiyoto Publishing House.

In the field of cinema, young Vietnamese filmmakers are increasingly popular in international playgrounds. Among them, cartoons and documentaries have the most prominent imprints. It is Ha Le Diem - a 9X Tay ethnic minority girl who was honored as Best Director in the International Competition category with the work Children of the Mist, at the Amsterdam International Documentary Film Festival (IDFA) - Netherlands.

After winning Grand Prix Documentary Short at the 66th Cork International Film Festival, Mua xuan vinh cuu (The Eternal Springtime) is eligible to compete for a short nomination for the 2023 Academy Awards. Duo director Ho Hoang and Paul Kennedy’s One Year On: The Essex Lorry Tragedy also brought many successes to the documentary, winning the first prize in the Short Documentary category at the Erie International Film Festival in Pennsylvania – the US.

According to writer Kieu Bich Hau, Associate Head of the External Affairs Office of Vietnam Writer’s Association, to promote Vietnamese literature more effectively, well-established translators around the world should be given the title Ambassador of Vietnam Literature for a long time so that they continue to devote their talents and efforts to the promotion of Vietnamese literature. The female writer emphasized building a team of new, young, talented, knowledgeable, and professional translators including both Vietnamese and foreigners.

As for short films or feature films, in fact, Vietnamese cinema's works currently have little chance to compete for high prizes at prestigious film festivals and awards. However, the filmmakers have been showing a lot of effort. The film Listener of Director Khoa Nguyen has also achieved encouraging success at a number of film festivals such as the Sydney Lift-Off Film Festival, the New York International Film Festival 2021. Another film Tam van phong dao (Female knife throwing board ) by Young director Nguyen Phan Linh Dan is the only project from Southeast Asia invited to attend La Fabrique at the 2022 Cannes Film Festival.

Young director Mai Vu of the animated film Giac mo goi cuon (Spring Roll Dream) received the Lights on Women award at the 2022 Cannes Film Festival with a value of up to US$30,000. Currently, the film has received distribution contracts in nearly 10 countries. The short animated film U Linh Ky narrative: Miracle Powder by director Leo Dinh also has been displayed at many large and small international film festivals. The Wofoo animated series was translated into 10 different languages before conquering the domestic audience. This series including 2,200 episodes each about 3 minutes has attracted billions of views.