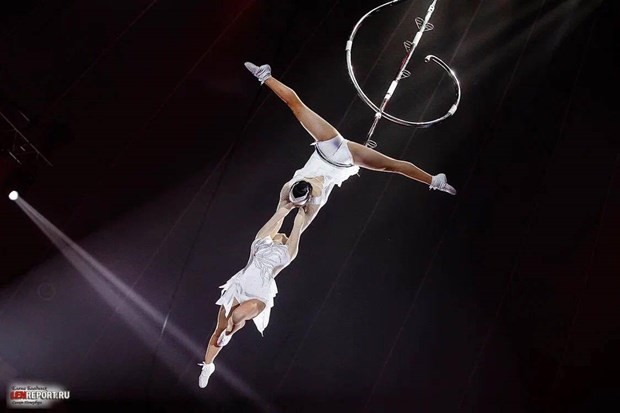 According to Deputy Director of the Vietnam Circus Federation (VCF) Tong Toan Thang, the performance of the two female artists was highly evaluated by the event's judges for the harmony between music, costumes, accessories as well as skillful techniques.

The award helped affirm the talent and position of Vietnam's circus art in the international arena, he said, adding that it is also motivation for domestic circus artists to continue to work for the development of their art.

In December 2021, Vietnamese acrobats Giang Quoc Co and Giang Quoc Nghiep broke their own world record by doing a head-to-head balancing act and climbing 100 stairs of the Girona Cathedral in Catalonia, Spain.

The duo originally set a world record in 2016 when they climbed 90 stairs of the cathedral in 52 seconds.

Both artists left Vietnam for Spain on December 17 and spent several days training before the attempt.

Strict COVID-19 prevention measures adopted by the Spanish Government, including the closure of fitness clubs, affected their training. The two artists had to train and perform in freezing temperatures.

But their efforts paid off when they finished in 53 seconds.

If there is a focused, methodical and strategic investment in human and physical health as well as the application of sci-tech in the art, the Vietnamese circus will continue to shine, on par with that of developed countries around the world, he said.