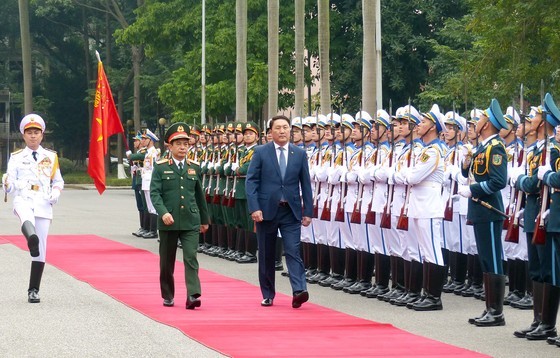 At a reception for the Mongolian minister, who is on an official visit and will attend the Vietnam International Defence Expo 2022, the Government leader said he believes that the visit will contribute to enhancing mutual understanding and trust, and lifting the traditional friendly relationship between the two countries in general and defence cooperation in particular to new heights.

The two sides are pleased to see that the traditional friendship between Vietnam and Mongolia has been continuously consolidated and developed after nearly 70 years since the establishment of diplomatic ties. Cooperation in the fields of politics, diplomacy, economy, trade, investment, agriculture, and education has been promoted by leaders at all levels and produced practical results.

They shared the view that in the context of complicated development of the world and regional situation, it is necessary for the two countries to strengthen their solidarity and enhance mutual trust, understanding and support.

He suggested the two sides continue to exchange high-level delegations, bolster political-diplomatic relations, support each other at multilateral forums, step up cooperation in education and training, people-to-people exchanges, and agriculture, as well as study the opening of direct air routes connecting the two countries.

PM Chinh asked the Mongolian minister to continue promoting the relationship between the two ministries of defence and the two armies of Vietnam – Mongolia to commensurate with the collaboration framework between the two countries.

For his part, Saikhanbayar emphasised that Vietnam has a special place in Mongolia's foreign policy and is an important partner in the region. The two countries always support and help each other. Mongolia considers Vietnam a reliable partner; highly appreciates the development of Vietnam and wishes to upgrade relations with Vietnam, he said.

Saikhanbayar Gursed briefed the host about the results of his visit to Vietnam, as well as the cooperation activities between the two Ministries of Defence and the two armies over the past time. He also expressed his desire to strengthen cooperation with Vietnam in officer training, military medicine, military sports, and exchange of experiences in participating in United Nations peacekeeping operations.

The same day, Minister of Defence Phan Van Giang held talks with the visiting Mongolian minister, during which the two sides acknowledged the constant and substantive development of bilateral relations in all fields.

They agreed that the two sides have effectively implemented the agreement between the two governments on defence cooperation signed in 2019, and vowed to continue to maintain high-level contacts and exchanges at all levels; improve the quality and efficiency of training cooperation and the sharing of experiences in participating in UN peacekeeping operations.

On this occasion, the two sides also exchanged assessments on world and regional situations and issues of mutual concern. They underlined the importance of preserving an environment of peace, stability, cooperation and development in the East Sea.