This was a statement of politburo member, Secretary of the Ho Chi Minh City Party Committee Mr. Nguyen Van Nen at a yesterday meeting with Singaporean Ambassador to Vietnam Mr. Jaya Ratnam.  At the reception, the city Party chief congratulated the ambassador for his new working term in Vietnam; and he informed that both sides not only have supported each other against the Covid-19 pandemic but also tried to seek new economic development opportunities and strengthen coordination with ASEAN countries against the global pandemic outbreak. The partner country is currently ranked the first in a list of Ho Chi Minh City’s largest countries and territories with investment capital of more than US$11 billion and 1,370 projects. For this reason, Mr. Nen hoped that the Singaporean ambassador and the leaders of Ho Chi Minh City should enhance connectivity to raise the relationship in all fields; and he affirmed that the city authorities would always create favorable conditions for the Singaporean businesses and investors. 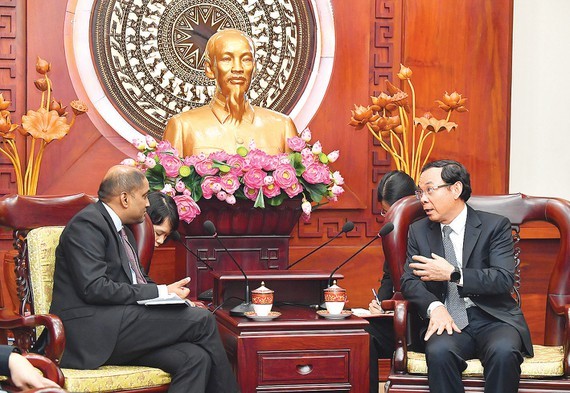 On the occasion, he also shared the Singaporean ambassador about the socio-economic situation of Ho Chi Minh City as well as the goal of developing Ho Chi Minh City into a hub for the economy, finance, commerce, science - technology and culture of Southeast Asia. To get the achievements, Ho Chi Minh City is making its efforts to build a smart city, innovative urban and financial centers. The newly-established Thu Duc City is expected to become the new driving force for HCMC’s economic development.

Additionally, it is expected to lure more and more investment projects of the partner country into Ho Chi Minh City and Thu Duc City.
As for the partner, ambassador Jaya Ratnam congratulated that the Covid-19 pandemic has been well controlled in Ho Chi Minh City in particular and Vietnam in general.