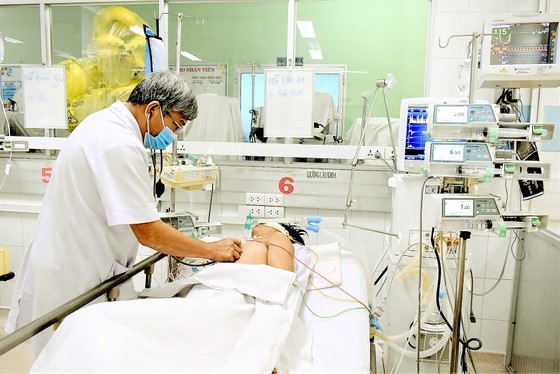 Compared to the same period in 2021, the number of cases increased by 4.8 times while the number of deaths increased by 81 cases. Worryingly, the Ministry of Health warned about a 5-year cycle. According to a five-year cycle, there could be a large dengue epidemic in many provinces and cities in coming November and December.

According to statistics from the Department of Health of Ho Chi Minh City, within 1 week, the southern metropolis recorded 1,999 dengue cases, and the number of serious patients hospitalized at treatment facilities tended to increase over the same period.

Last week alone, the city recorded three deaths from dengue in Binh Tan and Thu Duc districts, bringing the total number of dengue deaths since the beginning of the year to 29 cases.

At HCMC-based Children's Hospital, Dr. Nguyen Minh Tien, deputy director of the hospital, said that since the beginning of the year, the hospital has received more than 500 cases of severe dengue; worse, two patients succumbed to the fatal disease due to late admission and transfer in a very serious condition without prior consultation with large infirmaries. The cumulative number of dengue hospitalizations decreased, but the number of severe cases transferred still increased.

This year, the number of dengue cases with clinical manifestations is more severe than in previous years. Some patients suffered shock earlier while others were relapsing fever. There has been an increase in the number of people with high fever, severe liver failure, and heavy bleeding. The Department of Health of Ho Chi Minh City has recently directed the stratification of dengue treatment, so the department only accepts severe and very severe cases with about 50 percent of cases requiring respiratory support and intensive treatment, said Dr. Hai Duong.

Elsewhere in the country, the Bach Mai Hospital’s Center for Tropical Diseases in Hanoi in recent days admitted more patients with severe dengue who have to be hospitalized for treatment, making the center’s rooms crowded with patients. Associate Professor Do Duy Cuong, Director of the Center for Tropical Diseases, said that every day, the center receives about 20 serious patients with low platelets or hemoconcentration, shock, and multi-organ failure due to dengue fever.

Along with that, the hospitalization of dengue patients at many hospitals in Hanoi such as Saint Paul, Dong Da, Thanh Nhan, and Ha Dong increased continuously. According to the Hanoi Department of Health, from the beginning of 2022 to now, Hanoi has had about 7,000 dengue cases with five deaths, 3.2 times higher than the same period last year.

According to Mr. Nguyen Luong Tam, Deputy Director of the Department of Preventive Medicine, it is likely that in the near future, the dengue epidemic in Vietnam will continue to be complicated and the number of cases will continue to be high due to the peak of the annual epidemic. In particular, some epidemiologists warned that according to the outbreak cycle every five years, it is possible that next November and December will be the peak of the dengue epidemic in the Southeast Asian country.

Furthermore, the risk of relapse of diseases is also very great as Covid-19 is still present, along with flu, measles, chickenpox, and Adenovirus epidemics. Notably, when many people have a fever, they think they are infected with Covid-19, flu or some other disease, but they don't think they have dengue. Only on the fourth and fifth day, at which time the blood is concentrated and there are signs of low platelets, they are rushed to local hospitals. At that time, the patient’s condition is serious and they must be transfused with platelets or a macromolecular solution.

Associate Professor Do Duy Cuong said that many cases of severe dengue with multiple organ failure, elevated liver enzymes, liver failure, and kidney failure require dialysis, making treatment difficult. Therefore, when people experience fever, they should go to the hospital to have a blood count test and a simple diagnostic test such as Dengue NS1 antigen to detect dengue early in the early days. If test results have shown that they have dengue, they will receive timely treatment so that their condition will not develop worse.

According to Associate Professor Tang Chi Thuong, Director of the Department of Health of Ho Chi Minh City, in the face of the increasing number of dengue cases and deaths, the HCMC Department of Health has issued a decision to establish an expert group on dengue treatment with 15 pediatric experts, 13 adult specialists, four gastroenterologists, and one hematologist. This group has the task of participating in updating and supplementing treatment guidelines on dengue and collecting medical workers’ opinions on dengue treatment while waiting for the Ministry of Health’s guidelines for dengue treatment.