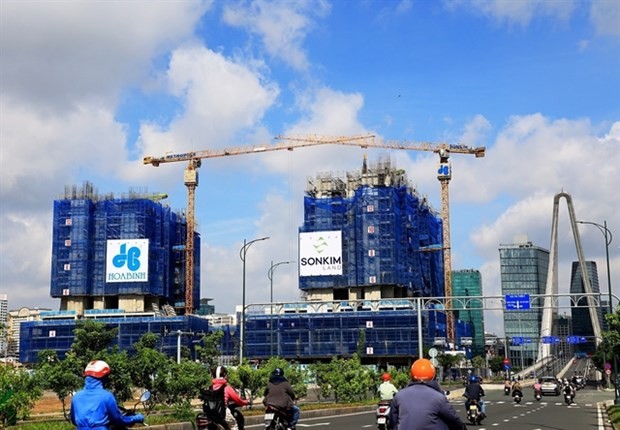 Work underway on buildings in HCMC which took the lead in foreign investment attraction in 11 months of 2022. (Photo: VNA)

During the period, new capital registered in the country by foreign investors saw a yearly decline of 18 percent to $11.5 billion while their capital contributions and share purchases also declined 7 percent year-on-year to nearly $4.08 billion.

The agency underlined two factors behind the falling registered capital, which were stringent Covid-19 preventive measures early 2022 and global uncertainties.

It said strict Covid-19 preventive measures imposed in the beginning months of the year had made it more difficult for foreign investors to travel to Vietnam to seek new investment opportunities. Such hindrance held back the number of newly-registered projects in early 2022.

One bright spot in the period was adjusted capital which surged 23.3 percent year-on-year to $9.54 billion, the FIA noted.

According to the agency, the adjusted capital continued to maintain its growth momentum, which was a signal to confirm the confidence of foreign investors in the economy and investment environment of Vietnam. Therefore, they decided to add more capital to their existing projects in the country.

Statistics from the FIA also showed that the average scale of adjusted capital per project in 11 months of 2022 increased 4.9 percent over the same period of last year. Notably, many projects in manufacturing of electronic and high-tech products witnessed capital added on a large scale during the reviewed period.

On the bright side, many large-scale projects had their capital adjusted up significantly in ten months. For instance, Samsung Electro-Mechanics was given two capital boosts, of $920 million and $267 million.

Samsung HCMC CE followed suit with $841 million. Other projects to manufacture electronics and multimedia devices in Bac Ninh, Nghe An and Hai Phong were financed with additional capital of $306 million, $260 million and $127 million, respectively.

At the same time, disbursed capital also witnessed a positive increase of 15 percent to reach $19.68 billion in the period, the FIA added.

From January to November, manufacturing and processing lured the lion's share of foreign investment with over $14.96 billion, making up 59.5 percent of total capital. It was followed by real estate with $4.19 billion, or 16.7 percent. Electricity production and distribution and science and technology were the runners-up with $2.26 billion and $1.03 billion, respectively.

Singapore was the top source of capital pledges in the period with $5.78 billion, accounting for 23 percent of the total. Japan came next with over $4.6 billion or 13 percent while the Republic of Korea ranked third with above $4.1 billion or 16.4 percent.

Others sources of foreign capital were China, Hong Kong (China) and Denmark.

In a recent report to the National Assembly, the Ministry of Planning and Investment said that foreign direct investment (FDI) disbursement this year could reach $21 billion - $22 billion, an increase of about 6.4-11.5 percent compared to 2021. These figures, then, meant that Vietnam's FDI attraction was rapidly moving towards recovery.

Truong An Duong from Frasers Property Vietnam Co told Dau tu (Investment) newspaper that his company was keen on looking for investment opportunities in Vietnam.