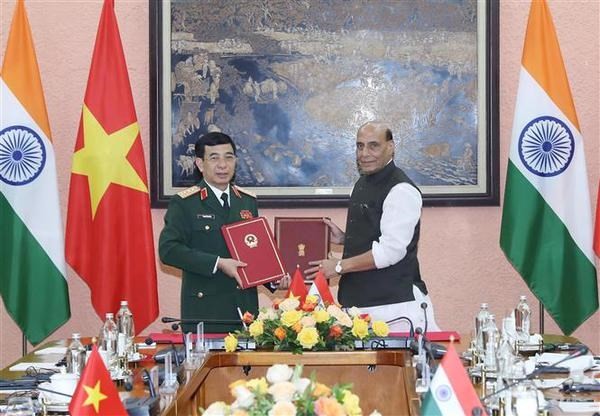 Concluding the talks, the two ministers signed a statement on Vietnam-India defence partnership joint vision towards 2030 and a memorandum of understanding on mutual support in logistics between the two ministries (Photo: VNA)

On the foundation of the Vietnam-India Joint Vision Statement for Peace, Prosperity and People released in December 2020, the two sides concurred to strengthen collaboration to fully and effectively implement signed agreements, focusing on increasing contacts and exchanges of delegations at all levels, especially high ones.

They will maintain and enhance the efficiency of dialogue and consultation mechanisms, especially the defense policy consultation at the deputy defense minister level, while fostering partnership in personnel training and cooperation among armed forces as well as coordination in participation in United Nations peacekeeping operations. They also agreed to strengthen coordination and consultations at multilateral forums.

General Giang underlined the significance of the visit as Vietnam and India are celebrating the 50th anniversary of bilateral diplomatic relations, expressing his belief that it will contribute to promoting the friendship and comprehensive strategic partnership between the two countries and the two ministries in particular.

He thanked the Indian side for supporting Vietnam, especially in personnel training and providing credit packages and assistance to the Vietnamese Ministry of National Defense.

For his part, Singh affirmed India considers Vietnam as a key partner in its Act East Policy, underlining that he hopes the comprehensive strategic partnership between the two countries will continue to thrive and expand to all fields such as politics, defense, security, trade, culture and people-to-people exchange. 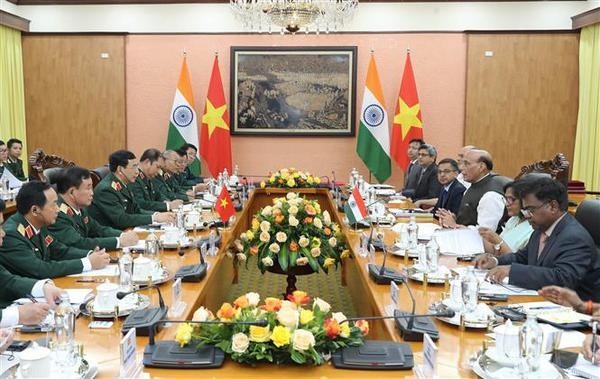 An overview of the meeting (Photo: VNA)
Regarding regional and global issues of shared concern, both sides held that peace, cooperation and development remain the major trend in the world. However, they showed concern at the complicated developments in the world and regional political and security situation with both traditional and non-traditional security challenges, along with impacts from the Covid-19 pandemic across the globe. Risks of instability are still latent in the security environment in the world and the Asia-Pacific region, they added. The two sides shared their views on the significance of maintaining peace, stability, maritime and aviation security, safety and freedom in the East Sea, as well as the settlement of disputes through peaceful measures in line with international law, including the 1982 UN Convention on the Law of the Sea (UNCLOS), along with the full and effective implementation of the Declaration on the Conduct of Parties in the East Sea (DOC) and the reaching of an efficient and substantial Code of Conduct in the East Sea (COC) that is suitable to international law. On the occasion, General Giang invited leaders of the Ministry of Defense of India and Indian military industrial firms to attend the International Defense Exhibition that is slated for late 2022. Concluding the talks, the two ministers signed a statement on Vietnam-India defense partnership joint vision towards 2030 and a memorandum of understanding on mutual support in logistics between the two ministries.
VNA