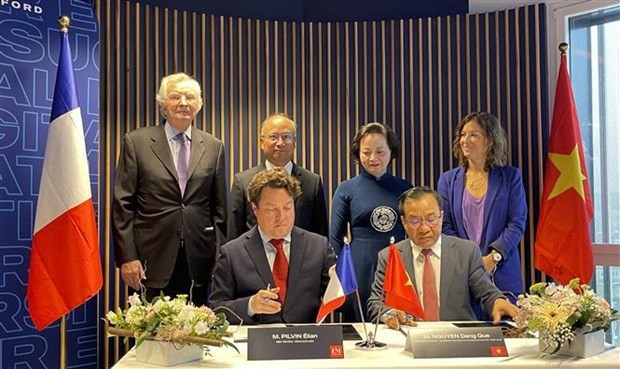 Minister of Home Affairs Pham Thi Thanh Tra witnesses the signing ceremony of a cooperation agreement between the National Academy of Public Administration of Vietnam and the French school. (Photo VNA)

The minister highly valued the Vietnam - France cooperative relationship, affirming that the strategic partnership establishment in 2013 reflected the two countries’ determination to further deepen the bilateral relations with a solid and long-term vision.

According to Tra, this course is a practical activity within the framework of cooperation in training, as well as a premise for upcoming cooperation activities between the two sides.

For his part, Elian Pilvin, Rector and General Director of the Normandie School of Management, said that since 2014, the school has organised training courses for over 200 civil servants and managers of the Vietnamese Party Central Committee’s Organisation Commission and localities of Vietnam.

After the ceremony, Tra witnessed a signing ceremony of a cooperation agreement between the National Academy of Public Administration of Vietnam and the French school.

The agreement aims to build a sustainable and effective partnership in training and scientific research in public administration, and to cooperate in human resources development, contributing to developing and modernising the public service and meeting requirements of the administrative reform of Vietnam.

The same day afternoon, she had a meeting with Mayor of Le Havre Édouard Philippe, during which the French official affirmed that he is ready to do everything to contribute to the bilateral relations.

He indicated that Le Havre’s shipping companies are very interested in Vietnam, and expected the two sides to exchange business delegations in this area.

He proposed the establishment of a twinning relationship of Le Havre with a coastal city of Vietnam towards forming specific partnerships and cooperation projects.