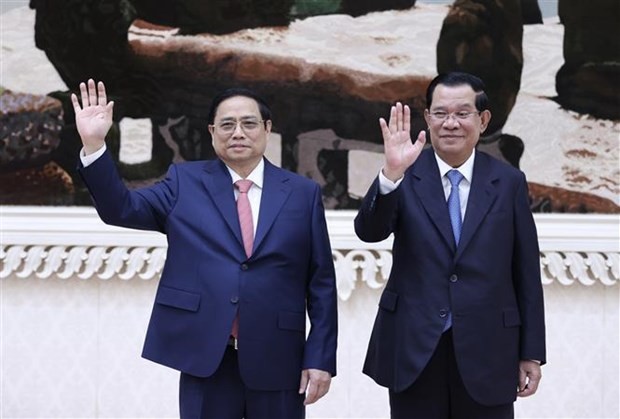 The following is the full text of the joint statement.

Between the Kingdom of Cambodia and the Socialist Republic of Vietnam on the Occasion of the Official Visit of H.E. Pham Minh Chinh,

2. Prime Minister Pham Minh Chinh also held a bilateral meeting with Samdech Techo Prime Minister Hun Sen. The two sides underscored the significance of His Excellency Pham Minh Chinh's first official visit to the Kingdom of Cambodia in his capacity as Prime Minister of the Socialist Republic of Vietnam to commemorate the 55th Anniversary of the Diplomatic Relations between the two countries in the joyous atmosphere of the “Cambodia - Vietnam, Vietnam - Cambodia Friendship Year 2022”.

In an atmosphere of friendship, mutual understanding and trust, both Leaders briefed each other on the current developments in their respective countries and had in-depth exchanges of views on all dimensions of bilateral cooperation as well as international and regional issues of mutual interest and concern.

3. Samdech Techo Prime Minister Hun Sen and other Cambodian Leaders applauded the great achievements that Vietnam has recorded in the course of national construction, reform and development as well as the country's remarkable accomplishments in Covid-19 response and socio- economic recovery and development. Samdech Techo Prime Minister of Cambodia wished the Vietnamese people, under the leadership of the Communist Party of Vietnam headed by General Secretary Nguyen Phu Trong, a success in implementing the Resolution of the 13th National Party Congress and make significant progress towards achieving the goals of turning Vietnam into an upper-middle-income economy by 2030 and a high-income industrialized country by 2045.

Prime Minister Pham Minh Chinh praised the significant achievements that the Government and the People of Cambodia have attained under the wise reign of His Majesty the King of Cambodia and the able leadership of Samdech Techo Prime Minister Hun Sen in the course of national development, and especially in promptly bringing the Covid-19 pandemic under control as well as promoting socio-economic recovery. Prime Minister Pham Minh Chinh congratulated the Cambodian Leaders on the successful communal elections in June 2022 and wished Cambodia a success in organizing the upcoming general election in 2023, as well as in realizing the goals of turning Cambodia into an upper middle-income country by 2030 and a high-income country by 2050.

4. Driven by the mutual desire to further advance bilateral relations under the mantra of “good neighborliness, traditional friendship, comprehensive cooperation, and long-term stability”, the two Leaders agreed to continue to fully observe the principles stated in the Vietnam - Cambodia Joint Statements in 1999, 2005, 2009, 2011, 2014, 2016, 2017, 2019 and 2021; to respect for each other’s independence, sovereignty and territorial integrity, non-interference in each other’s internal affairs and to settle any problem arising between the two countries by peaceful means.

5. The Leaders of the two countries commended the successful organization of various meaningful activities during the “Cambodia – Vietnam, Vietnam - Cambodia Friendship Year 2022”, most notably the 45th Anniversary of the Commemoration Day of Historical Journey Leading to the Overthrow of the Pol Pot’s Genocidal Regime by Samdech Techo Hun Sen, which was presided over by the two Prime Ministers in Tbong Khmum Province, Cambodia and Binh Phuoc Province, Vietnam on 20 June 2022 and the solemn celebration of the 55th Anniversary of the Establishment of Diplomatic Relations between the Kingdom of Cambodia and the Socialist Republic of Vietnam on 24 June 2022 in Hanoi.

7. The two sides expressed satisfaction over the fruitful development of the close ties and comprehensive cooperation between Vietnam and Cambodia in recent years, which have brought about substantial benefits to the people of the two countries. Overcoming the challenges posed by the Covid-19 pandemic, the political ties between the two countries have been continuously strengthened through exchanges of high-level delegations in all channels and regular discussions via various means of communication, while ensuring the continued effective operation of the bilateral cooperation mechanisms. Both sides reaffirmed their determination to further consolidate and develop the friendship between Vietnam and Cambodia, and foster the depth and breadth of bilateral cooperation in a substantive and effective manner, considering it an indispensable and objective demand of the two countries. Besides maintaining frequent visits and interactions at all levels, they agreed to hold the 20th Meeting of the Vietnam - Cambodia Joint Commission on Economic, Cultural, Scientific and Technological Cooperation in the first quarter of 2023 and the 12th Conference on Cooperation and Development of Vietnam - Cambodia Border Provinces on a mutually suitable date in 2023 in Vietnam.

8. Both sides were resolved to further strengthen bilateral economic cooperation, contributing to supporting each other to build an independent and self-reliant economy while ensuring its extensive and effective international integration. They emphasized the need to enhance connectivity between the two economies, both in terms of physical infrastructure as well as institutions and policies, including through expediting the completion of the Master Plan on Vietnam - Cambodia Economic Connectivity 2030.

Encouraged by the recent robust growth in trade value between the two countries, with greater balance and complementarity, both sides expressed their commitment to further promoting and facilitating bilateral trade, particularly border trade, through the effective implementation of the newly-signed Agreement on Border Trade and the MOU on the development and connection of border trade infrastructure. On that basis, the two sides undertook to deepen economic ties between bordering provinces. Both sides were also committed to ceaselessly promoting supply and production chain connectivity between the two countries with the signing and implementation of the Joint Undertakings between the two Governments on the cumulation of origins of bicycle materials and parts to be eligible for the GSP of the European Union and the United Kingdom. Acknowledging the importance of creating a more conducive and preferential environment for two-way trade and investment and improve the ease of doing business, the two sides agreed to effectively provide facilitation to investors and enterprises from one country to operate in the other, as well as to ensure the effective implementation of the Investment Promotion and Protection Agreement and the Agreement on the Avoidance of Double Taxation.

9. The two sides agreed to strengthen cooperation in defense and security based on the principle of not allowing any hostile forces to use their respective territories to harm the other's security and interests. They reaffirmed to work closely together to effectively implement the agreements in force and make effective use of the existing mechanisms on defense and security cooperation to enhance coordination in maintaining political stability, security, social order and safety in each country, as well as improve the effectiveness of border management and protection. Both sides emphasized the importance of cooperation in consular protection of citizen in accordance with the 1963 Vienna Convention on Consular Relations, in addressing cross-border crimes such as human and drug trafficking, as well as safeguarding cyber-security. They also agreed to continue joint efforts to search for, retrieve and repatriate the remains of Vietnamese volunteer soldiers and experts who sacrificed their lives in Cambodia, accelerate the repatriation of the remains of the combatants of the National United Front for Salvation of Kampuchea from Vietnam to Cambodia, based on the spirit of the two countries’ technical working group meeting on 28 October 2022 in Ho Chi Minh City, Vietnam.

10. The two sides expressed satisfaction with the completion of the demarcation and marker planting works of approximately 84 percent of the land boundary and commended ongoing efforts of the Cambodia – Vietnam, Vietnam – Cambodia Joint Border Commission (JBC) to find mutually acceptable solutions to the 16 percent remaining works in accordance with all border treaties concluded between the two countries with a view to building a land boundary of peace, stability and cooperation between Cambodia and Vietnam. The two sides agreed on the need to conclude the agreement on land border checkpoints, which shall substitute relevant provisions in the 1983 Agreement on Border Statute in the near future. The two sides also agreed to promote the effective operation of the border checkpoints system, including through the opening and upgrading of the border checkpoints agreed between the two countries and to include Meun Chey – Tan Nam International Border Checkpoint to the Designated Border Gates for transit, under the Agreement on the Transit of Goods between the Government of Cambodia and the Government of Vietnam, signed in 2013.

11. The two sides also agreed to promote and improve the effectiveness of cooperation in other important areas such as legal and judicial affairs, labor and social affairs, science and technology, information and communications, development of renewable energy resources, smart agriculture, education and training, public health, cultural exchange, tourism, sports, transportation, banking and finance, agriculture, forestry, fisheries, and maritime law enforcement, among others.

12. Prime Minister Pham Minh Chinh expressed high regards and appreciation to the Kingdom of Cambodia for the continuous support and non-discriminatory treatment extended to the people of Vietnamese origin living in Cambodia over the past years.

13. The two sides exchanged views and agreed to continue enhancing the close and effective cooperation and collaboration within the multilateral frameworks such as the United Nations and ASEAN to address global and regional challenges, as well as sub-regional fora including Mekong cooperation mechanisms to ensure the effective, inclusive and sustainable development, management, utilization and conservation of the Mekong water resources and related resources. Reaffirming Vietnam's full, active and effective support for Cambodia’s Chairmanship of ASEAN in 2022 under the theme of “ASEAN A.C.T.: Addressing Challenges Together”, Prime Minister Pham Minh Chinh congratulated Samdech Techo Prime Minister Hun Sen on Cambodia's tremendous efforts and substantive outcomes achieved so far in ASEAN in 2022. He reiterated full confidence in the eventual success of the 40th and 41st ASEAN Summits and Related Summits to be held under Cambodia's chairmanship in Phnom Penh from 10 to 13 November 2022, which will contribute to the promotion of the ASEAN's Centrality, unity, solidarity and resilience in response to the existing and emerging challenges and threats, for the sake of peace, stability, sustainable development and prosperity in the region and beyond. Prime Minister Pham Minh Chinh reiterated Vietnam's readiness to support Cambodia and Lao PDR to promote the Cambodia - Laos - Vietnam Development Triangle Area (CLV DTA) cooperation and step up the implementation of the Action Plan for CLV Economic Connectivity up to 2030 to jointly build integrated, sustainable and prosperous CLV economies, contributing to the ASEAN Community Vision 2025.

14. The two sides reiterated ASEAN’s common position on the importance of maintaining and promoting peace, security, stability, safety, and freedom of navigation in and overflight above the South China Sea, promoting dialogues, enhancing mutual trust and confidence, exercising self-restraint, pursuing peaceful resolution of disputes in accordance with international law, including the 1982 United Nations Convention on the Law of the Sea (UNCLOS), without resorting to the threat or use of force, ensuring the full and effective implementation of the Declaration on the Conduct of Parties in the South China Sea (DOC) in its entirety and working towards the early conclusion of an effective and substantive Code of Conduct in the South China Sea (COC) consistent with international law, including the 1982 UNCLOS.