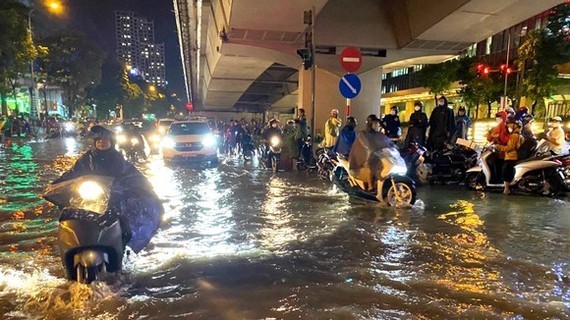 In thunderstorms, there is a possibility of tornadoes, lightning, and strong gusts of winds. There is a risk of flash floods and landslides in mountainous provinces and a risk of inundation in low-lying areas. The disaster risk level due to tornadoes and lightning is level 1.

At sea, the Northeastern part of the North East Sea region has strong northeasterly winds of level 5, sometimes level 6, with gusts of level 7-8, rough seas, and waves of 2-3.5m high. The natural disaster risk level due to strong winds at sea is level 2. All ships and other activities in the above waters are at high risk of being affected by strong winds and big waves.

Provinces and cities from Da Nang to Binh Thuan will have showers, scattered thunderstorms, and isolated heavy rains. Amid thunderstorms, there is a possibility of tornadoes, lightning, and strong gusts of winds. The Northeast to East wind is at levels 2-3. The lowest temperature is 23-26 degrees Celsius, and the highest is 29-32 degrees Celsius.

In the coming hours, thunderstorm clouds will continue to develop, causing showers and thunderstorms in the above areas. After that, thunderstorm clouds are likely to expand to the West and spread to nearby areas. Rainfall is at 5-15mm and over 20mm in some places. During thunderstorms, it is essential to watch out for tornadoes, lightning, and strong gusts of levels 5-6.

Heavy rain caused a section of 300 meters of National Highway 1A through Ganh Do Hamlet in Xuan Dai Ward in Song Cau Town in Phu Yen Province to be flooded 0.2-0.3 meters underwater on November 13. Sometimes, the water overflowed like a waterfall on the national highway, disrupting the North-South traffic direction. 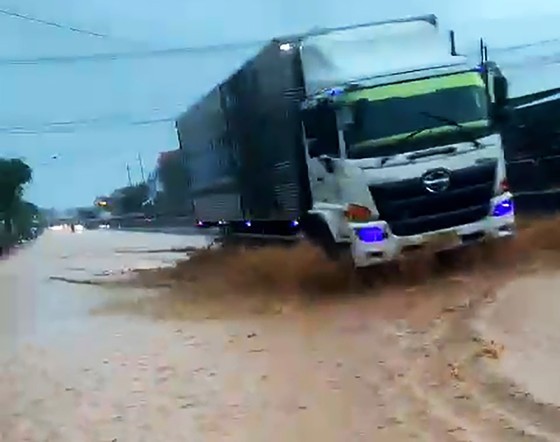 Authorities and local people have been stationed at the flooded point to support vehicles moving North-South to travel safely through National Highway 1A. By the early afternoon of the same day, the rain has begun to decrease, and the water has gradually receded, no longer flowing rapidly.
However, because the section of National Highway 1A through Phu Yen Province was damaged too badly, with many potholes, accompanied by heavy rains which caused flooding and blocked visibility, it put many vehicles at risk of damage and accidents.

On the afternoon of the same day, Mr. Nguyen Thanh Tam, Chairman of the People's Committee of Xuan Tho No.2 Commune in Song Cau Town, informed that the locality was helping to overcome the consequences of a landslide that buried a house in Hao Nghia Village.

Earlier, on the evening of November 12, heavy rain caused a high mountain to suddenly collapse and bury the house of Tran Van Khanh in Hao Nghia Village. Fortunately, there were neither casualties nor great damage to property.

“Due to the early detection of the mountain collapse, the properties in Khanh's house were moved to a safe place, so there was no major damage, but the house was buried," said Mr. Nguyen Thanh Tam.

Heavy rains also caused flooding and division in many key points in Song Cau Town and Tuy An District in Phu Yen Province. 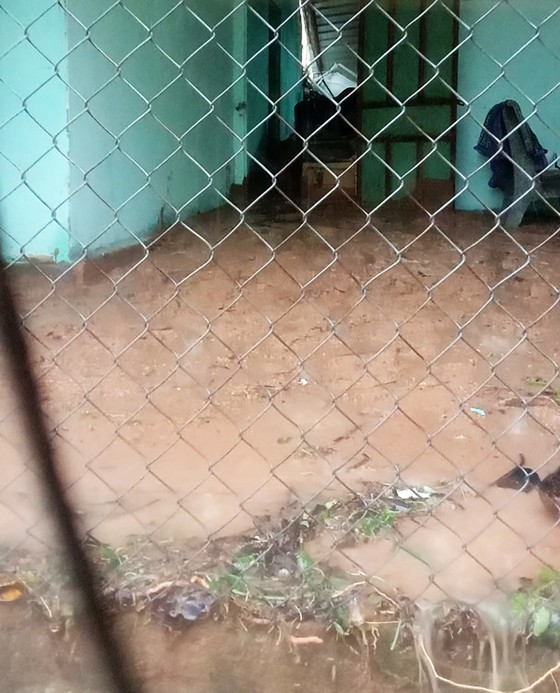 Heavy rains cause flooding in Tuy An District in Phu Yen Province. (Photo: SGGP)
Around 6 p.m. on November 12, heavy rain caused rocks and soil on the mountain to suddenly fall down, collapsing the wall of Dao Thi T.'s house in Can Luong Village in An Dan Commune in Tuy An District. At that time, T. and her son, L.D.L.N., were inside the house and were crushed by rocks.

Heavy rain caused rocks and soil on the mountain to suddenly fall down, collapsing the wall of Dao Thi T.'s house in Can Luong Village in An Dan Commune in Tuy An District. (Photo: SGGP)
Le Van Tan, T.'s husband, who was in another place at that time, discovered the incident and immediately shouted for help from the villagers and the local authorities. Many people quickly excavated and rescued two victims from the landslide.

The two victims were brought to the hospital afterward.

Rocks and soil overflow into the house of Dao Thi T. in Tuy An District in Phu Yen Province. (Photo: SGGP)