According to the Department’s announcement, the vaccination campaign would start at FPT Software Ho Chi Minh City at lot E3-2.34.5 in Street D2 at the Hi-Tech Park in Thu Duc City’s Long Thanh My Ward. As per the plan, about 400-500 people would be vaccinated.

To carry out a safe vaccination campaign in 5-7 days, the city's health sector mobilized 13 groups of medical facilities including grass-root institutions in districts and wards, public and non-public hospitals, even vaccination units of VNVC, the company in charge of importing and storing vaccines in Vietnam. 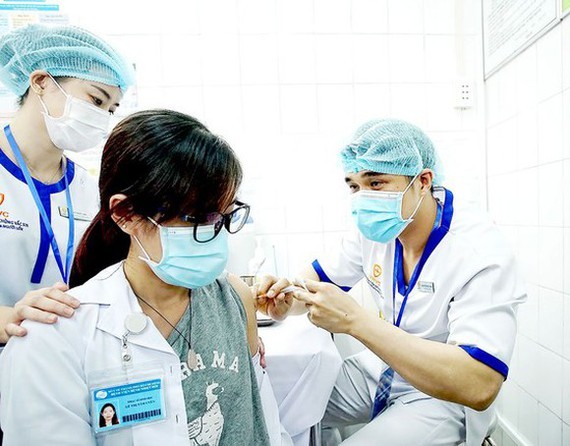 The Department of Health of Ho Chi Minh City has also just listed people in the ten priority groups for vaccination and free vaccination according to Resolution 21 of the Government.
Approximately 2,385,223 doses of vaccines will be administered to all these groups. Residents living in epidemic areas in Ho Chi Minh City have been counted by the health sector, including people in Go Vap District; in Tan Thoi Nhat ward and Thanh Loc ward in District 12, and workers in industrial parks and export processing zones.
In addition, the city has planned to allocate 608,716 doses of vaccine for people over 65 years old and 202,443 doses for poor dwellers and social policy beneficiaries.
Previously, on June 17, Japanese Government - sponsored 800,000 doses of AstraZeneca vaccine were delivered to Ho Chi Minh City for the biggest vaccination campaign in the city.
Ho Chi Minh City-based Children's Hospital 2 yesterday said that the hospital had just established a treatment area for Covid-19 children at a corner of its campus in the hospital. The well-equipped treatment area has 50 beds, 10 recovery beds, well-ventilated rooms.