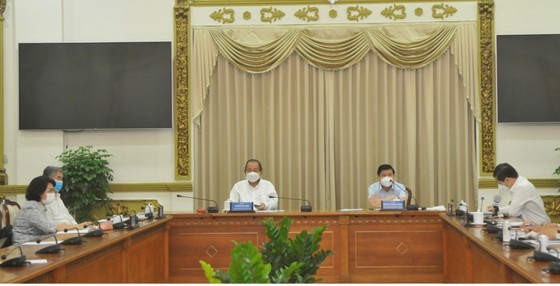 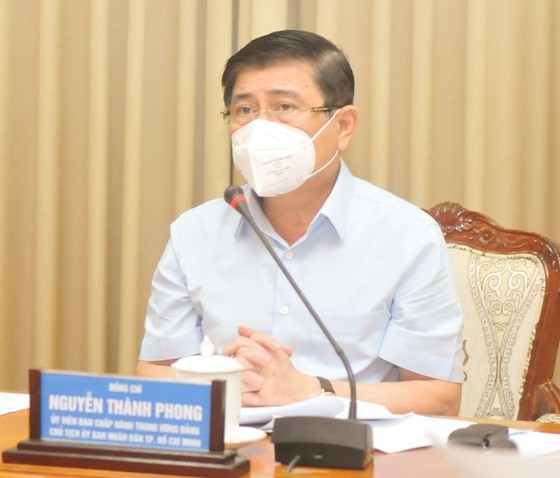 Chairman Nguyen Thanh Phong at the meeting (Photo: SGGP)
Speaking at the meeting, Chairman Phong said that from May 18 till June 13, the city recorded 821 Covid-19 cases. Of these, Go Vap district had the most with 115 cases.
As the novel coronavirus has spread to all districts of Ho Chi Minh City and still developed complicatedly after two-week implementation of social distancing. Worse the infection chains with unknown source of infection show that the epidemic has crept into the community since the beginning of May; therefore, the leader decided more two-week social distancing. 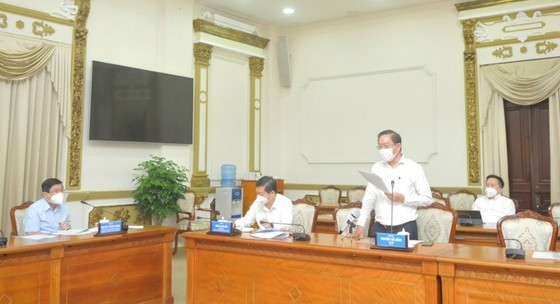 Professor Nguyen Tan Binh at the meeting (Photo: SGGP)
Previously, Professor Nguyen Tan Binh, Director of the Department of Health of Ho Chi Minh City proposed to continue implementing social distancing throughout the city under the Prime Minister’s Directive 15, including Go Vap District and Thanh Loc Ward in District 12 where implemented social distancing according to the Prime Minister's Directive 16 for the last two weeks.
According to the director, people with the virus are still in the community; therefore, the city should continue implementing social distancing in the next 15 days to curb the spread thoroughly.
Reporting to the Ho Chi Minh City Steering Committee for Covid-19 Prevention and Control, Chairman of the Go Vap District People's Committee Nguyen Tri Dung said that only a few new Covid-19 cases have been recorded in wards 17 and 9 and the situation is well controlled.
Currently, Go Vap District authority has been tightening control over the area, especially rental houses, businesses, wholesale markets, long and small alleys, and religious venues.
Moreover, the district has called for over VND1.4 billion donations for the city's vaccine fund. More than VND1 billion contribution from benefactors was for supporting people and households falling into difficulties because of the impacts of the epidemic.
Meanwhile, Chairman of District 12 People's Committee Le Truong Hai Hieu said that on June 13, District 12 recorded a few of new Covid-19 cases; however, from June 7 to now, no new cases in Thanh Loc ward was reported; hence, the leader of District 12 proposed not to continue implementing Directive 16 but Directive 15.
Standing Deputy Prime Minister Truong Hoa Binh said that the infection in the community has not been completely controlled. For instance, new cases at the Hospital for Tropical Diseases or in many other hospitals in the city have been recorded.
Mentioning the infected case at PouYuen Vietnam Company, the leader of Binh Tan district said that the company has been applying good preventative measures; accordingly, no more cases are reported. 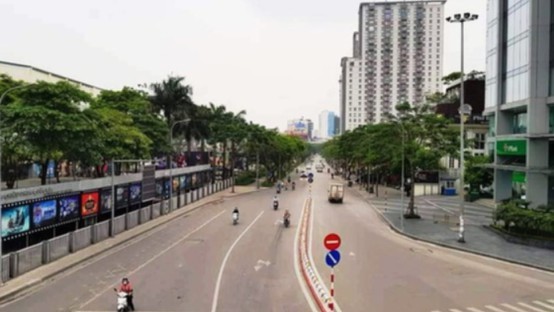 HCMC in social distancing time
According to Chairman of Thu Duc City People's Committee Hoang Tung, Thu Duc city has recorded 88 infection cases in 22 wards, 46 of them are related to a religious mission in District Go Vap while 25 cases have been contracted the virus from an unknown source.
From May 18 to June 13, the number of infection cases increased continuously; as a result, Thu Duc City has set up seven isolation areas with 1,856 beds and 180 people were brought to centralized isolation areas.
The number of contacts F1 in Thu Duc City is forecast to increase, so the district has established some more isolation areas. Currently, 52 cases in wards Hiep Binh Chanh, Hiep Binh Phuoc, Tang Nhon Phu A and Tang Nhon Phu B are recorded. Thu Duc City proposed HCMC Military High Command to spray disinfectant in these areas.
Thu Duc is home to many industrial parks and seaports, so it is recommended that Ho Chi Minh City should consider a scenario of a closed production process to avoid cross-contamination and new locally - transmitted cases.