The aircrafts No.VN310 and VN330 carrying Bac Giang Province’s lychees took off from Hanoi and will land in Narita and Osaka. VNA used wide-body planes, Boeing 787 and Airbus A350 to ensure the highest quality fresh fruits. 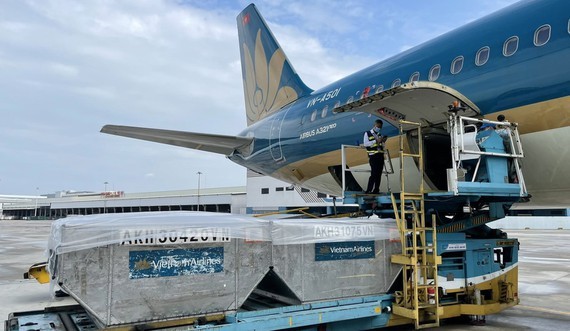 The first batches of nearly 10 tons of lychees are exported to Japan by planes operated by Viet Nam Airlines. (Photo: SGGP)
In addition, front-line healthcare workers of hospitals, employees of the Ministry of Health, Centers for Disease Control in cities and provinces nationwide who take missions in the battles against the Covid-19 pandemic in Bac Giang and Bac Ninh provinces can fly for free on VNA’s planes.

The carrier has maintained international routes carrying goods and specialists to support industrial production and international trading of localities throughout the country at preferential prices.