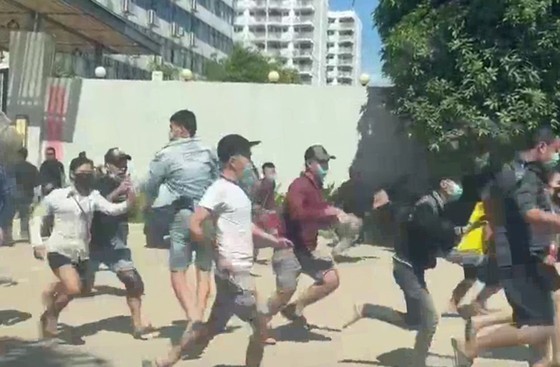 The group of Vietnamese workers flee from the Cambodian casino to Vietnam.
On August 19, the An Giang Provincial Border Guard Command said that the Long Binh border gate station in Long Binh Town, An Phu District is clarifying and verifying the identity and profile of these people. These workers come from the provinces and cities of Vietnam.
They initially declared to flee from a Cambodian casino in Sampeou Poun Commune, Kaoh Thom District of Kandal Province. Before arriving at the shore, one person among them was caught by a casino security guard and another person's situation is unclear.

Through a brief investigation, these people confirmed that most of them illegally entered Cambodia via the southern provinces’ border areas. After entering the country, they worked at casinos.

Many of these workers had previously worked at Cambodian casinos under the management of Chinese men in areas bordering the provinces of Tay Ninh and Long An. After that, they were handed over to a casino in Sampeou Poun Commune, Kaoh Thom District, Kandal Province.

Due to overtime working without salary and rest, the people found a way to escape from Cambodia.

The Long Binh border gate station in collaboration with local authorities and An Phu District Police mobilized a rescue team to search the missing one, performed Covid-19 rapid test for the 40 people, and temporarily took them to the Community Education Center in Da Phuoc Commune, An Phu District for rest and clarification.