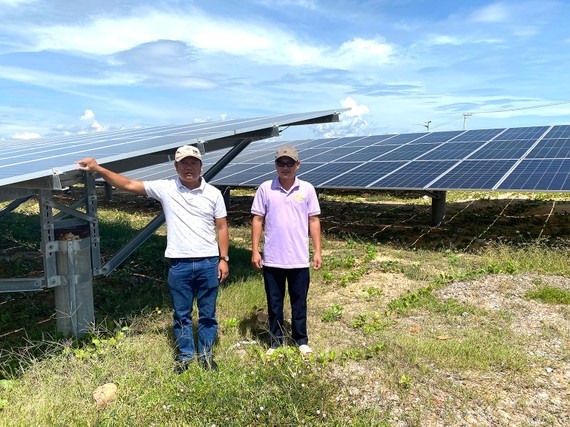 Mr. Huynh Tan Huy, Deputy CEO of Clean Energy Vision Development Joint Stock Company, the investor of the Phu My solar power project in My An and My Thang communes in Phu My District of Binh Dinh Province, confided that fortunately, Storm Noru that hit the Central of Vietnam at the end of September did not cause any damage to the project.

The project, located close to the sea, is built firmly along the undulating sand slope. The solar panels are attached to each other in rows, more than 2 meters above the ground. Underneath them is a support system with concrete pillars buried deeply in the ground. In the middle of the plant is a massive transformer station and an operational office, where a technical team is always on duty to operate day and night. According to the company's report, the project covers an area of 325ha and is divided into three phases, including Phu My 1, 2, and 3, with a total investment of nearly VND7.34 trillion and a capacity of 330MWp.

To implement the project, the investor carried out several procedures. The Prime Minister approved to supplement the project to the revised National Power Master Plan VII, allowing to convert the forest use purposes to other purposes. The People's Committee of Binh Dinh Province approved the investment policy and leased land. The Ministry of Natural Resources and Environment approved the environmental impact assessment report. The Department of Electricity and Renewable Energy under the Ministry of Industry and Trade appraised the basic design and approved the feasibility study report and construction design. In addition, to connect to the national grid, the investor constructed the 220kV transmission line with two circuits which is 18.4km long from the plant's substation to the 220kV Phu My substation.

In a report sent to the supervisory delegation of the National Assembly's Committee on Science, Technology, and Environment in mid-August 2022, the leader of Clean Energy Vision Development Joint Stock Company said that phases 1 and 3 of the project had been put into operation, connected to the national power grid, and paid for electricity. However, phase 2 of the project, with a capacity of 114MWp and a total investment of more than VND2 trillion, completed construction in the first quarter of 2022, has been accepted by agencies but has not been able to sell electricity because it did not complete before January 1, 2021, as prescribed.

The company proposed to let it connect phase 2 to the grid to record the product. Later, when there is a purchase price of electricity, power output will be calculated. However, EVN did not approve its proposal. “Currently, the company faces many difficulties, financial pressure, and cash flow for this investment. The company hopes that the supervisory delegation will soon propose to the Prime Minister and the Ministry of Industry and Trade to allow the project to connect to the power grid, record the output of the realized power capacity, and issue a policy on electricity purchasing prices," the report stated.

Mr. Huynh Tan Huy said that with the power generating capacity of phases 1 and 3, the electricity output of phase 2 can be calculated. The company loses a revenue of over VND23 billion every month because it cannot sell electricity. The company has to pay nearly VND20 billion of bank interest every month, not including the cost of cleaning and replacing batteries because of lightning strikes and labor costs.

Up to this point, the most spectacular solar project is the Trung Nam - Thuan Nam Solar Power Plant, located in Phuoc Minh Commune in Thuan Nam District of Ninh Thuan Province, with a total investment of nearly VND12 trillion. The project has a capacity of 450MW, combined with an investment in Thuan Nam 500kV transformer station and 500kV and 220kV transmission lines to connect to the national power system, covering an area of 557.09ha.

Mr. Phan Tan Canh, Vice Chairman of the People's Committee of Ninh Thuan Province, analyzed that it was a conditional project. It means that besides the construction of the solar power plant, Trung Nam Construction Investment Joint Stock Company - the investor - has to invest and build the entire system of transmission lines and substations to connect the company's power grid, as well as those of other projects, to the national power grid. This system alone costs nearly VND2 trillion. In return, the investor will be compensated by the revenue from power sales by exploiting the full capacity of the project. It is also appraised by the bank in the project's loan plan.

After more than six months of construction, the entire Trung Nam - Thuan Nam Solar Power Plant and power transmission lines were completed and inaugurated in October 2020, eligible for preferential power selling prices as prescribed. However, many controversies have started to arise since then. The plant has a capacity of 450MW, but only 277.88MW is paid for electricity selling. At first, the electricity industry supported the investor in exploiting the remaining 172.12MW and recorded the power output. However, recently, the Electric Power Trading Company under the Vietnam Electricity (EVN) sent a notice about stopping buying 172.12MW of solar power from Trung Nam Group as of September 1, 2022.

However, the portion of nearly 4.2 billion kWh of power capacity transmission for other solar power projects in the region from October 2020 to now, equivalent to about VND360 billion in electricity sales revenue, has not been calculated for Trung Nam - Thuan Nam Solar Power Plant. The investor's representative said that the loan for the entire project accounted for up to 70%, so when EVN stopped 40% of the project’s capacity, it broke commitments with credit institutions when mobilizing capital, leading to the inability to repay loans.

The reason for the controversy is that the 172.12MW capacity is outside the power planning of Ninh Thuan Province. Resolution No.115/NQ-CP signed by the Prime Minister in August 2018 agrees that Ninh Thuan Province will enjoy the electricity purchasing price policy under Decision No.11/2017/QD-TTg until the end of 2022 for solar power projects, and the connection infrastructure, with a design capacity of 2,000MW, has been approved for deployment. Next, Decision No.13/2020/QD-TTg of the Prime Minister also stipulates that solar power in Ninh Thuan Province must have a total accumulated capacity not exceeding 2,000MW. Accumulating licensed and in-operation solar power projects plus the 172.12MW of Trung Nam - Thuan Nam Solar Power Plant, the total solar power capacity has exceeded the limit granted to Ninh Thuan.

In the face of many petitions from the investor, the People's Committee of Ninh Thuan Province, and the NA delegation of Ninh Thuan Province, on September 24, Deputy Prime Minister Le Van Thanh chaired the meeting and directed the Ministry of Industry and Trade to comprehensively review the investment in the construction of Trung Nam - Thuan Nam Solar Power Plant in association with investment in the transmission grid, connection and release of power source capacity in the region, and electricity purchase contracts to ensure consistency and compliance with regulations. Nearly a month later, on October 23, EVN issued a press release confirming that the stop of mobilizing the 172.12MW capacity that has not had a pricing mechanism of Trung Nam - Thuan Nam Solar Power Plant is in accordance with the provisions of the law.

Three solar power projects invested by Ninh Thuan Energy Industry Joint Stock Company under the T&T Group in Ninh Thuan Province, with a total investment of nearly VND5 trillion, are also unable to sell electricity. Accordingly, the Thien Tan 1.2 Solar Power Plant in the semi-flooded area of the Bieu riverbed in Phuoc Ha Commune in Thuan Nam District, with a capacity of 100MWp and a total investment of nearly VND2 trillion. The project started in November 2020 and was completed on December 31, 2020, and is commercially operated with a capacity of 48.23MWp; the rest is finished after that.

The Thien Tan 1.3 Solar Power Plant project is carried out in the semi-flooded area of Lanh Ra lakebed in Phuoc Vinh Commune in Ninh Phuoc District, with a capacity of 50MWp and a total investment of nearly VND1 trillion. The project started in November 2020 but only managed to be in time for the commercial operation date on December 31, 2020, with a capacity of 8,038MWp. It completed 31.96 MWp out of 40MWp in March this year. The remaining 10MWp has not been carried out yet. Up to now, the commercially-operated capacity of Thien Tan 1.2 and Thien Tan 1.3 solar power projects merely stops at the step of recording power output with the Electric Power Trading Company. The remaining electricity capacity is neither allowed to generate nor record the output.

The Thien Tan 1.4 Solar Power Plant project in Phuoc Chien Commune in Thuan Bac District has a scale of 100MWp, covering an area of 120ha, with a total investment of nearly VND2 trillion. The project has completed the installation work and is waiting to connect to the national power grid because the approved 220kV Nha Trang - Thap Cham transmission line has not been finished yet.