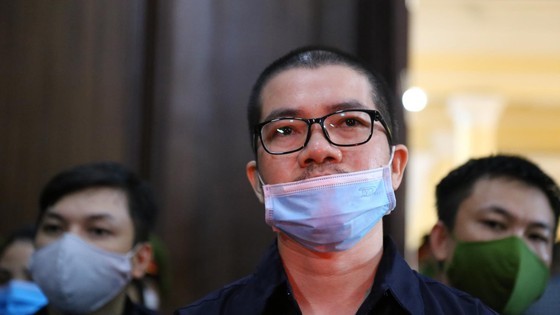 In this case, Nguyen Thai Luyen, Chairman of the Board of Directors of Alibaba Company, and his younger brothers, Nguyen Thai Linh, General Director of Alibaba, and Nguyen Thai Luc; Vo Thi Thanh Mai ( Luyen's wife ) and 18 defendants are brought to trial for the crime of fraudulent appropriation of property. 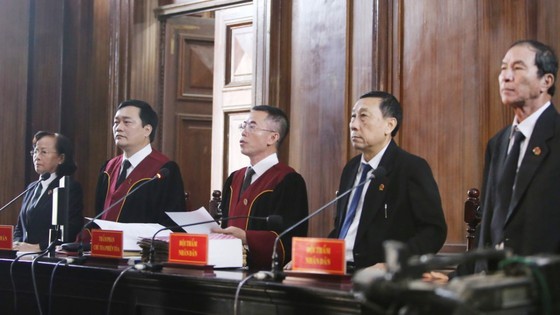 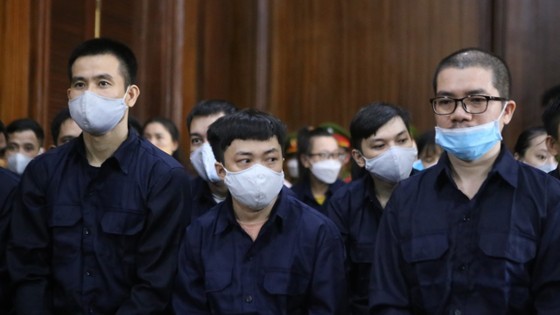 The accused at court on December 8. (Photo: SGGP)
Around 7:45 a.m. on the same day, Nguyen Thai Luyen was escorted to court. He looked thinner than the time when he was arrested. 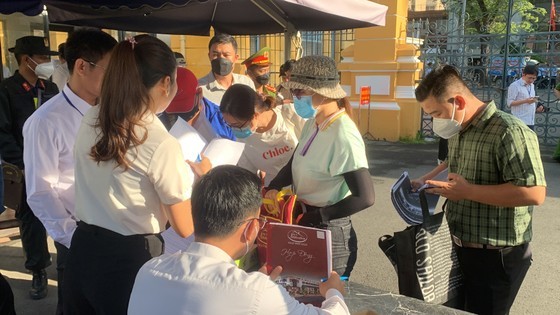 People carry out procedures to enter the court. (Photo: SGGP) 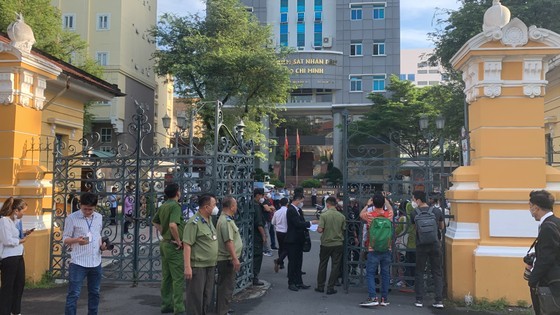 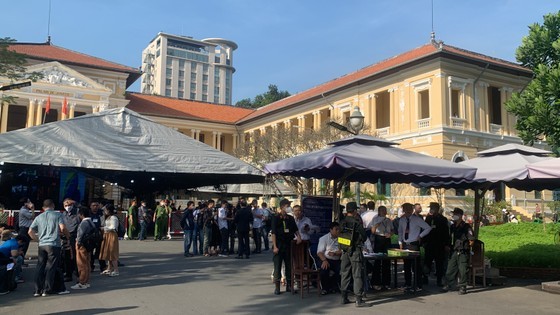 Security is tightened at the court. (Photo: SGGP)
This case has a file of about 1 million records. The case indictment and the appendix are explained in 500 pages. The prosecution agency had to use two trucks to carry the documents. In addition, nearly 5,000 people will participate in the proceedings, including 3,980 victims, 100 people with related rights and obligations, and more than 40 lawyers defending and protecting legitimate rights and interests. Therefore, to serve the trial, the People's Court of HCMC had to build a pavilion, prepare chairs and fans, install speakers, and equip a large screen in the yard. Due to the exceptionally large number of victims, to ensure that the litigants can present their opinions at the trial, the People's Court of HCMC has announced the time to participate in the trial. 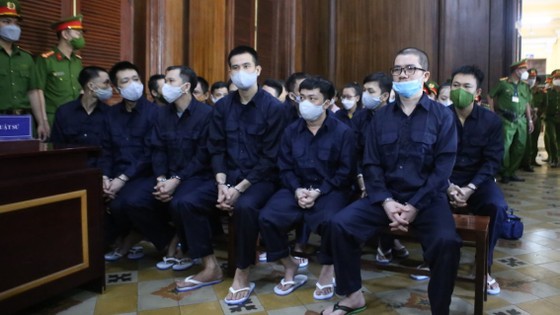 The accused at the court on December 8. (Photo: SGGP)
The People's Court of HCMC suggested that the victims go to the trial according to the specific plan and time. When they go to court, they must bring the receipts, transfer contracts, and identity documents. Victims of 58 projects will participate in the questioning scheduled from December 13 to 21, 2022. 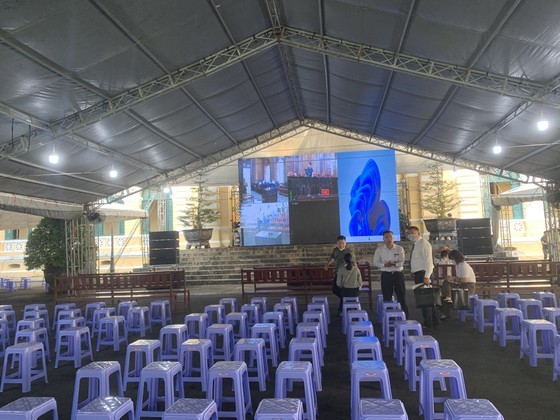 A LED screen is installed to serve the trial. (Photo: SGGP) 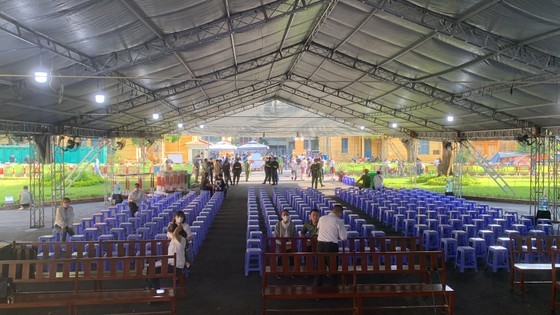 The area for people to watch the trial. (Photo: SGGP)
According to the indictment, in May 2016, Nguyen Thai Luyen established Alibaba Company with a charter capital of VND1 billion. One year later, the company adjusted for the third time, with the charter capital increasing to VND1.6 trillion. At the same time, Luyen established 22 affiliate companies under Alibaba, operating in fields such as real estate and transportation. Subsidiaries are all under the name of Luyen's relatives and trusted employees. The legal entities of these companies established by Luyen were a means for fraudulent acts to appropriate property. 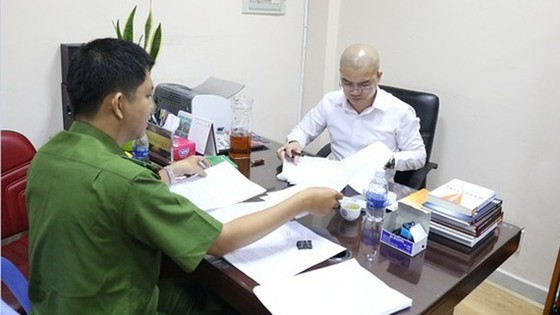 Nguyen Thai Luyen at the time when he is prosecuted by the investigation agency. (Photo: SGGP)
Specifically, subjects operated with sophisticated methods and tricks, disguising themselves as real estate business but actually, they scammed through multi-level capital mobilization, using land plots in fictitious projects as bait. Luyen and his accomplices drew up 58 projects by themselves, in which they divided and separated land plots illegally, then sold them to thousands of people, appropriating more than VND2.1 trillion. Luyen used a small amount of personal money and most of the funds appropriated from customers for his relatives and trusted employees of Alibaba Company to transfer large quantities of agricultural land in Dong Nai, Binh Thuan, and Ba Ria - Vung Tau provinces. After that, they made authorization contracts for legal entities established by Luyen to fabricate fictitious projects on agricultural land and then subdivide and separate land plots illegally. After receiving authorization, legal entities as investors in these bogus projects will use the media for advertising and finding customers. Next, Luyen directed the investors to sign cooperation contracts to distribute and sell land plots in these self-fabricated projects with Alibaba Company. From there, Alibaba Company became a distribution agent for customers to conceal the illegal origin of projects and create fake transactions for customers to believe that the projects were legal and eligible for transfer. After the customer agreed to buy, Luyen directed the above legal entity to sign an agreement to transfer the land-use rights to the customer. The money transferred to Alibaba Company was for Luyen to manage and use. 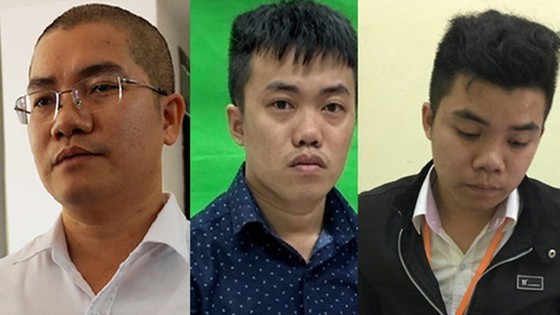 From left to right: Nguyen Thai Luyen, Nguyen Thai Linh, and Nguyen Thai Luc. (Photo: SGGP)
To create trust and attract customers, Luyen and his accomplices promised to buy back the land at higher prices, from 30 percent upward after 12 months or 38 percent after 15 months from the date of payment. Consultants also lured customers that they could rent land plots back for 2 percent per month from the date of signing if they paid 95 percent of the contract value. With this method, most customers who bought residential land plots offered by Alibaba Company did not receive the certificates of land-use rights as committed on the due date. Instead, all were converted by Alibaba Company to the form of interest payment or buyback, according to the attached option contracts or contract addendums. Besides fraud in the real estate business mentioned above, Alibaba Company and 22 affiliated entities had no other legal business activities. All 22 legal entities under the same branch did not have any business-related tax declaration, statement, and payment activity but only declared and paid business-license tax.
By Chi Thach – Translated by Bao Nghi

Friday, February 03, 2023 08:51
The Lam Dong Province Department of Agriculture and Rural Development informed that in January, it discovered 18 cases of illegal deforestation on a surface area of 1.74ha.