Vietnam enjoys strong rise in Indian tourist number (Photo: VNA)
The administration reported that Vietnam welcomed 20,681 Indian visitors in October and 82,066 in the first 10 months of 2022. Since July, the number of Indian tourists to Vietnam each month surpasses the figures recorded in 2019.

Notably, searches for Vietnamese destinations from the Indian market are rising quickly, with the volume in October increasing three folds compared to that in July and doubling that in August. The most searched destinations include Hanoi, Ho Chi Minh City, Phu Quoc, Da Nang, and Quy Nhon.

The agency attributed the rise to the results of tourism promotion activities in the Indian market, along with the launching of many direct air routes linking the two countries.

In October, the number of foreign tourists rose 12.1 percent over the previous month. Tourism revenue in the January-October period reached VND425 trillion (US$17.08 billion), equivalent to 74 percent of that in the same period of 2019. In the period, the Republic of Korea topped the number of tourists to Vietnam with 26.3 percent of the total arrivals. 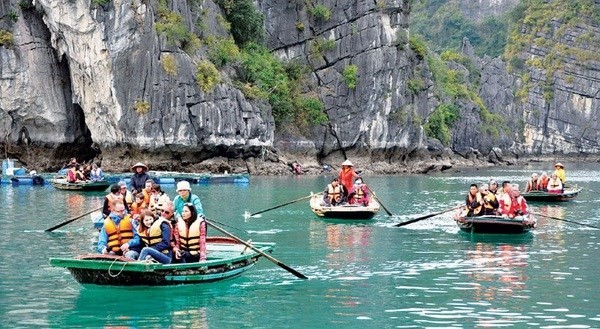 Tourists visiting Ha Long Bay (Photo: VNA)
Data from the travel tracking tool Google Destination Insights showed that the number of international searches for tourist accommodations in Vietnam in October continued to increase about 20 percent compared to September 2022 and 11 times over March.

The top 10 countries with highest searches for Vietnam tourism are the US, Australia, Singapore, India, the Republic of Korea, Japan, the UK, Malaysia, Thailand and Germany, while the top 10 most searched destinations in Vietnam include Ho Chi Minh City, Hanoi, and Da Nang.

In October, the administration issued licenses to 70 travel firms to operate international tours, raising their number so far this year to 2,816.