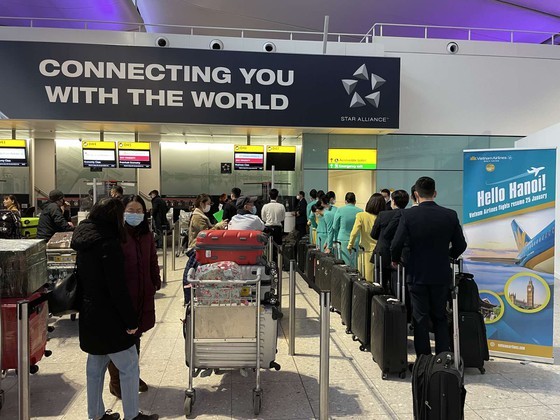 Passengers in Europe are checked before boarding
Accordingly, Vietnam Airlines’ VN36 flight from Frankfurt in Germany to Hanoi carried 190 passengers, and VN18 flight from London - Paris -Hanoi carried nearly 300 passengers, respectively, safely landed at Hanoi's international airport.
The national flag carrier has so far reopened regular commercial flights from and to countries and territories including the US, Japan, Korea, Singapore, Thailand, Cambodia, Taiwan, Australia, Russia, and most recently Britain, France, and Germany.
With the resumption of regular flights, the Vietnamese people and tourists in European countries can plan their travel and buy tickets easily. Passengers only need to meet the regulations to test negative, get vaccinated, or recover from Covid-19 disease before departure.
Vietnam Airlines maintains preventive measures such as disinfecting aircraft, simplifying services to limit repeated contacts. Passengers monitor their health and isolate according to the regulations of the Ministry of Health.
From February 8, the flight schedule to Europe including the UK, France, and Germany will be deployed on two fixed routes. The first route departs every Tuesday with the route from Hanoi to London, via Frankfurt, and back to Hanoi.
The second route departs every Thursday with the route from Hanoi to Paris, via Frankfurt, and back to Hanoi.