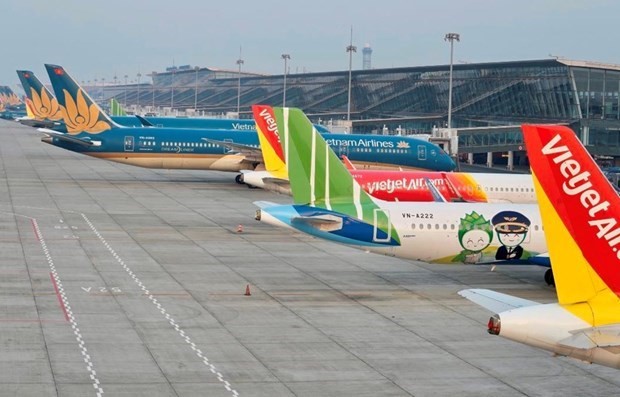 Planes of Vietnamese airlines (Photo: VNA)
In a report to the MoT, the CAAV said as of October 6, six localities completely agreed with its air route resumption plan, namely the provinces of Dien Bien, Khanh Hoa, Phu Yen, Binh Dinh, and Thanh Hoa, along with Phu Quoc city of Kien Giang province.
Four others, comprising HCMC, and Dak Lak, Nghe An, and Thua Thien-Hue provinces, showed partial support while Hanoi, Hai Phong city, and Gia Lai province asked for continued suspension of regular commercial flights.
The 10 air routes that could be re-opened are the ones between HCMC and Thanh Hoa, Khanh Hoa, Phu Yen, Binh Dinh, Phu Quoc, Thua Thien-Hue, and Nghe An; and the routes between Thanh Hoa and Khanh Hoa, Buon Ma Thuot city (Dak Lak), and Phu Quoc.
The air routes are resumed only when both localities that are home to the airports related to the routes approve. More routes will be added when receiving support from other localities.
Each of the routes between HCMC and Thanh Hoa, Khanh Hoa, Phu Yen, Binh Dinh, and Phu Quoc will have four flights per day. Meanwhile, the ones between Thanh Hoa and Khanh Hoa, Buon Ma Thuot, and Phu Quoc will have one flight per day.
There will be one flight per week for the route linking HCMC and Thua Thien-Hue, and two flights per week for the route from Nghe An to HCMC.
According to the CAAV’s proposal, passengers boarding flights must comply with the 5K principle (khau trang - wearing face masks, khu khuan - disinfection, khoang cach - keeping distance, khong tu tap - no gathering, and khai bao y te - making health declaration), make health declaration at places of departure and arrival, and produce certificates of their full vaccination against Covid-19.
In particular, passengers must receive their last vaccine dose at least 14 days and no more than 12 months prior to their departure, or they have to show certificates of recovery from Covid-19 no more than six months prior to the departure.
Those departing from “red zones” (very high-risk zones) must have a negative result of RT-PCR or rapid antigen tests within 72 hours.
In the initial period, passengers departing from HCMC, Binh Duong, Dong Nai, and Long An, which are Covid-19 hotspots in the south at present, will have to conduct self-health monitoring for seven days, adhere to the 5K principle, and undergo testing on the first and seventh days since their arrival, the CAAV said.