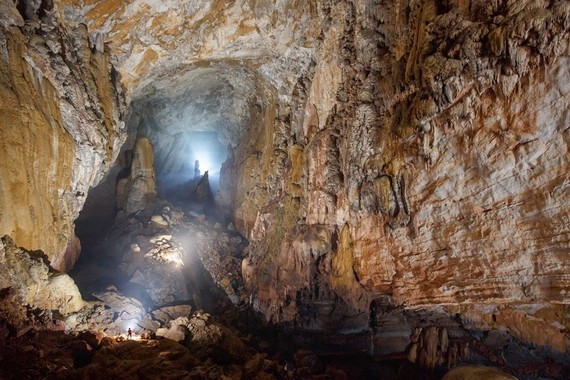 Accordingly, the US website Wonderslist stated that Son Doong Cave of Vietnam was the largest cave in the world, formed on a fault of the Truong Son Mountain Range which had been eroded by groundwater for millions of years creating a giant tunnel under the mountain’s limestone.
The list included Ice Cave near Mutnovsky Volcano in Russia, caves in Algarve, Portugal, Marble Caves in Chile and Argentina, Antelope Canyon in the Southwest of the United States, Waitomo Glowworm cave in New Zealand, Cave of Swallows in Mexico, Sonora cave in Texas, United States, Fingal cave in Scotland, Painted cave in California, United States.

According to the Phong Nha – Ke Bang National Park Management Board, the Son Doong Cave was surveyed by a team of the British Cave Research Association (BRCA) in 2009. Son Doong currently measures a total of 38.5 million cubic meters which is the biggest natural cave in the world.

On April 30 of 2013, Guinness World Record recognized Son Doong as the world’s largest cave. After that, the Good Morning America program of US-based ABC channel performed a live program from Son Doong Cave in 2015 which would have promoted the cave as a new symbol of Vietnam's tourism sector.