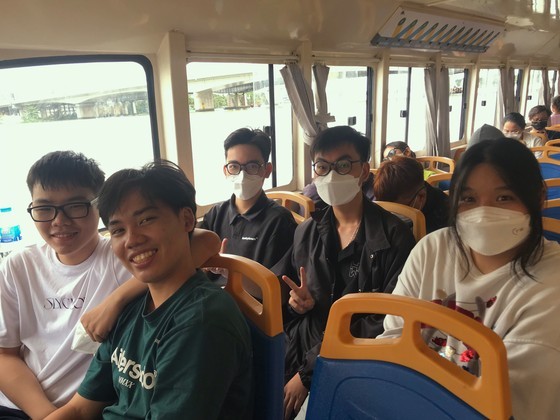 Young people are interested in taking a cruise through Saigon by waterbus
Although it is a weekday, at 8:30 a.m., passengers including domestic tourists to foreigners gathered at the waiting hall at Bach Dang wharf in District 1 to take the river bus route No. 1. They were excited to travel by waterbus.
The journey of a river bus departed from Bach Dang wharf on the Saigon River in District 1 through Thanh Da canal to Saigon River in Binh Thanh District and to Linh Dong wharf in Thu Duc City. Sitting in the boat compartment, the surrounding scenery is worth experiencing compared to taking other public transport on the road.
On the far shore is the city's expanded commercial area, then the Thu Thiem 2 bridge across the Saigon River - a new symbol of Ho Chi Minh City chosen by many young people as a check-in point every weekend and Landmark 81 skyscraper - the tallest building in Vietnam. When the massive riverside mansions are out of sight, the route will cut through the Thanh Da canal and the trip ends at the final stop at Linh Dong wharf. The 10.8km trip takes about 45 minutes.
18-year-old Le Nguyen Gia Huy in Tan Binh District has just passed the high school graduation exam and had the opportunity to hang out with a group of friends. Huy revealed that he is a city dweller, but this is the first time he has had the opportunity to experience a river bus. The group of young Saigonese men were excited and chatted happily while sitting on the boat from Binh An wharf to Bach Dang.
In an effort to get people to shift from private to public transport, river buses are clearly a good solution. City administrations not only try to encourage city dwellers to use the new public transportation but they expect to attract local travelers and international tourists to the river bus.
28-year-old holiday-maker Pham Bich Hien from the Mekong Delta Province of Bac Lieu said that she is a bit afraid of traffic jams and pollution, so she feels good about experiencing a tour around the city by river bus.
However, there is an existing problem in turning river buses into public transportation. 24-year-old man Tran Nguyen Tai in Thu Duc City said that going out on the Saigon River is a great experience, but a river bus is not a good choice for traveling to companies because the price is still quite high.
According to recent statistics, on average, each month in Ho Chi Minh City, there are 30,000 newly registered vehicles, which means 1,000 new vehicles are registered every day. Therefore, a river bus is an option to help reduce traffic congestion and reduce environmental pollution, but in reality, it still does not meet the travel needs of city residents.

By Do Quyen – Translated by Anh Quan