Overcoming challenges
As planned, the flights will depart on December 8, 15, 22 and 29, 2021 and January 5, 12 and 19, 2022. The carrier will raise the number of flights to seven per week after the country basically puts the pandemic under control and allows the reopening of international air routes. Vietnam Airlines is offering one-way tickets for this route at an affordable price of US$430. 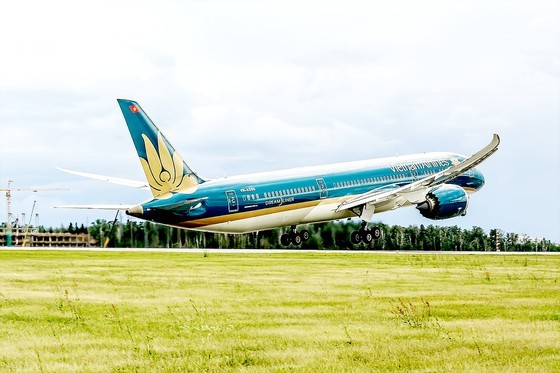 Illustrative image (Photo: SGGP)
General Director of VNA Le Hong Ha said that the carrier has planned a combination of passengers and goods transport to effectively exploit the flights in the situation that the Government was unlikely to allow full resumption of international air routes. The airline has currently provided one-way business class ticket for flights from the U.S. to Vietnam via ticket agents selling tickets for repatriation flights. After international flights are allowed to reopen fully, the company will start providing various fare classes on the airline's website, mobile app, ticket offices and agencies.
Vietnam’ aviation industry has spent 20 years of preparation for the opening of a regular air route to the U.S., meeting strict requirements and regulations of the U.S.’s aviation administration to receive an allowance from the United States Department of Transportation (USDOT or DOT), the Transportation Security Administration (TSA) and the Federal Aviation Administration (FAA) and being granted slots at airport.
Take advantage of opportunities 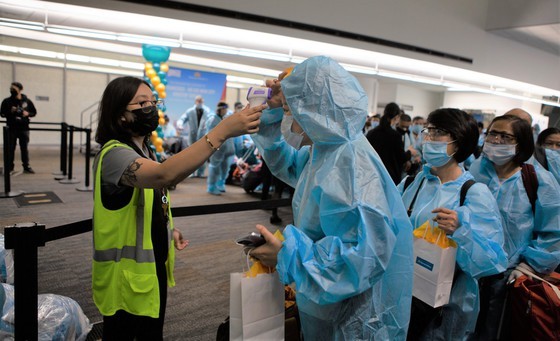 Passengers of the first commercial direct flight from HCMC to San Francisco in the U.S on November 28
According to experts, the Vietnam-US direct air route has a lot of potential because the U.S. is the country having the largest number of overseas Vietnamese and Vietnamese students. The U.S.-Vietnam aviation market reached 1.4 million passengers in 2019, showcasing an average growth of eight percent in the 2017-2019 period.
The U.S. ranked 10th in the list of markets having the highest number of travelers to Vietnam. It is one of the country's biggest markets that have not got direct air route to Vietnam yet.
Vietnam is the United States' 10th largest trading partner while the U.S. is one of the leading partners in the country. Total trade turnover between the two countries reached US$90.8 billion in 2020 despite the pandemic.
The new commercial direct flight takes 14-16 hours when traveling to the U.S. instead of 20-25 hours and transiting through Hong Kong (China), Taiwan (China) or South Korea for a normal journey. This helps passengers save time and costs.
It takes 5-10 years to get benefits with the new service due to the fierce competition among 20 carriers operating direct routes to the U.S., said insiders.
In addition, other carries including Bamboo Airways and Vietjet Air expect to open non-stop commercial flights to the U.S. to boost trade, tourism and service exchanges between the two nations.