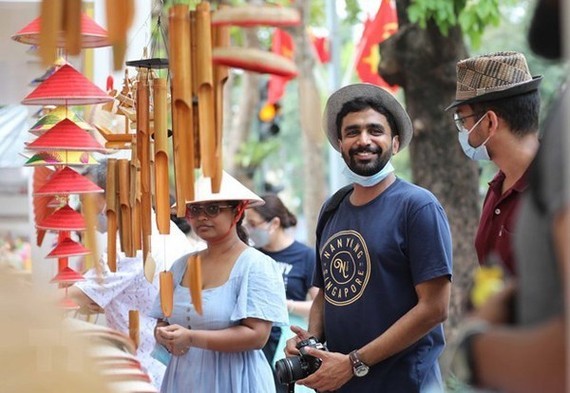 A few days after Vietnam officially opened to the Indian tourism market, Indian visitors have increased in volume, as also seen in a surge on search information sites about Vietnam. According to data from Google Search Engine, the search volume for flights to Vietnam from India has exploded by 400 percent since the beginning of April 2022 compared to the same period last year. This increased to more than 3,000 percent a month later.
Along with searching for flight routes, Indian tourists have also increased their search for accommodation in Vietnam. The growth rate of accommodation search from the beginning of April to the middle of May 2022 increased by nearly five times. Vietnamese destinations that are of most interests to Indian tourists include Ho Chi Minh City, Hanoi, Phu Quoc, Quy Nhon, Da Nang, Hoi An, and Nha Trang.
At the beginning of August last year, in a program to introduce Da Nang tourism in New Delhi in India, Mr. Pham Sanh Chau, Vietnamese ambassador to India, said that the foreign tourism demand for Indian tourists is currently very large after a long time of being cooped up by the Covid-19 pandemic. Currently, Vietnam is attracting quite a lot of Indian tourists. This can be seen in the average number of visas issued per day after the Covid-19 pandemic. The increase is 24 times, from 250 visas per day to 6,000 visas per day. According to statistics, by the end of September 2022, there were 94,000 Indian visitors to Vietnam.
More and more direct flights between Vietnam and India are being opened now. The third quarter business result report of Vietjet Aviation Joint Stock Company showed that the airline opened more than 10 new international routes focused on the Indian market. The airline brought in visitors from the capitals of the West Indies and also the Indian cities of Ahmedabad, Hyderabad, and Bangalore to Vietnamese cities such as Hanoi, Ho Chi Minh City, Da Nang, and Phu Quoc Island.
Both Indian and international press have given positive reviews on Vietnam and its many attractive destinations from the eyes of Indian tourists. In early October, the Financial Express Newspaper in India reported that after a two-year hiatus due to the Covid-19 pandemic, this year's festival season will be the first festival season for Indians to have a full holiday, so this year, Indian tourists are expected to focus on more resort tourism.
For international travel, affordable destinations like Vietnam are becoming a popular choice among many Indians. Statistics for the first week of October 2022, show the Delhi-Vietnam route rank second in terms of the number of searches in India. Previously, in September, Travel + Leisure Magazine, the American travel and lifestyle magazine in India, rated Vietnam as one of the ten most ideal destinations for Indian tourists during the Diwali festival.
Indian tourist market
As a person with nearly ten years of experience working with the Indian tourist market, Mr. Phan Dinh Hue, Director of Viet Circle Travel, said that India is a large market with a lot of potential to exploit many customer segments. In this, the middle-class group prefers to choose high-end tourism products such as resorts in destinations such as Phu Quoc Island or Da Nang, and a few more destinations such as Ho Chi Minh City and Hanoi.
In addition to this group of guests, a large number of Indian tourists have more affordable needs with 3- or 4-star hotels in many other destinations in Vietnam. The potential is there, but Mr. Hue emphasized that in order to exploit this market well, it is necessary to understand it with patience and make preparations more thoughtfully.
First of all, it is necessary to meet the dietary needs of this group of guests. Indians do not eat beef dishes, and most of the time they ask to eat Indian dishes only. Indian restaurants are not available in many provinces or small cities of Vietnam but are confined mainly in big cities. Therefore, to attract Indian visitors, it is necessary to have more restaurants specializing in Indian dishes in many localities across the country. In addition, Indian tourists are also quite tight in spending and very often have the habit of negotiating and comparing prices before deciding to buy a product. Therefore, it is essential to learn the Indian mentality and approach before marketing for larger groups.
It is also important to note that Indian tourists like to visit attractions that have cultural connections with India. This is also the reason why Indians were attracted to Bali in Indonesia, mainly because of the ancient Hindu citadel. According to some industry experts, Vietnam has an advantage in the South Central Coast where there is the ancient Champa and Sa Huynh culture and several Indian characteristics and artefacts to show for this. However, along with careful preparation to meet the requirements of this group of visitors, promotion, and marketing of Vietnamese destinations in the Indian market is very important.
With this new surge in Indian tourism, a question has also arisen as to whether India which has a population of 1.3 billion people, can replace the volume of the traditional Chinese tourism market in Vietnam. This is yet to be seen in months and years to come. In order to welcome more Indian tourists, Vietnam must prepare carefully for a fresh and new market. For a long time, Chinese tourists to Vietnam have been in large numbers, so it is difficult to say if Indian tourists can replace the Chinese market in the coming future.