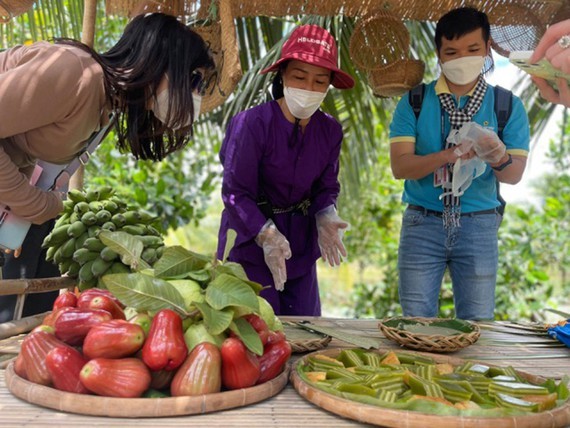 Tourists visit Ben Tre on November 13. (Photo: SGGP)
HCMC has reopened several one-day tours to tourist sites, such as Can Gio, Cu Chi and its neighboring provinces of Long An and Ben Tre.

Ms. Truong Huong Thuy of District 12 said that her family had a chance to enjoy fresh air in a tour to Can Gio District and took a cycling tour to visit local salt farmers in Thanh An Island Commune after spending much time for staying at home due to social distancing periods.
Saigontourist Group, one of the country's leading tourism agencies organized a group tour to the Mekong Delta province of Ben Tre on November 13-14. According to the provincial Department of Culture, Sport and Tourism, the province will receive travelers to visit safe destinations in self-contained tours ensuring standards for healthcare and safety.
Deputy General Director of Vietravel Tourism Company Huynh Phan Phuong Hoang said that the company has worked with provinces of Ha Giang, Tay Ninh, Khanh Hoa and Binh Dinh to develop tourism cooperation and local economy.
Travel companies such as TST Tourist and Viet Media Travel Corporation have also received many calls on tours at the end of year.
According to Director of the Center for Trade, Tourism and Investment Promotion of Dong Thap Province Vo Tien Thanh, the local authority has allowed tourist sites, leisure and entertainment venues to resume their operation. The province plans to carry out a pilot program of tourism recovery from the middle of November to the middle of December. The next phase that will resume all its tourism activities will begin in the middle of January, 2022. 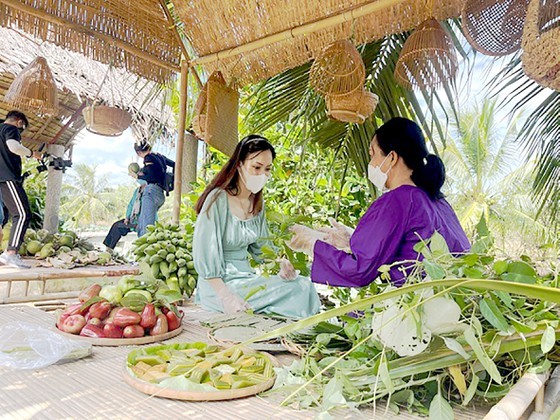 Tourists visit Ben Tre on November 13. (Photo: SGGP)
In the beginning of November, Kien Giang Province has received visitors to tourist sites, leisure and entertainment venues. Domestic travelers must only complete healthcare declaration. In addition, the province is ready to welcome back international visitors. A flight operated by Vietjet Air and departed from South Korea’s Incheon is expected to carry around 250 passengers to Phu Quoc Island on November 20.
Meanwhile An Giang Province will strengthen special tourist products to attract visitors and promote the province’s culture and tourism via social platforms, such as Facebook, Tiktok, YouTube, Instagram. The province expects to draw 3-4 million domestic tourists from now until the end of year.
There are over one month left until the end of 2021 and the pandemic has been basically put under control leading to an increase in leisure travel. Localities and tourist companies put their hopes on the year-end travel season to gradually recover the smoke-free tourism industry.

Chairman of Vietnam National Administration of Tourism Nguyen Trung Khanh led a delegation to inspect plans on receiving international tourists in Da Nang City and Quang Nam Province on November 14-15.
He asked all tourist facilities to strictly comply with the decision No. 4122/HD-BVHTTDL on temporary guidance for receiving international visitors to Vietnam, and coordinate with functional units to update latest standards for safety in travel and tourism. Travelers will be allowed to take part in tourism activities as scheduled before the departure. Before entering the country, they need to prepare the necessary documents and install and declare health through Vietnam Safe Travel application (Vietnam Safe Travel - VST) on smartphones; save the QR code or print the QR code to present at the border gate.