At the event, organized by the Ministry of Culture, Sports and Tourism and the Quang Nam province People’s Committee, Mr. Thien said that the central region and the Central Highlands' large tourist potential hat not been exploited well. Forests have been destroyed, local cultural identity and heritages have been eroded and damaged.
Economic models have been toward depleting natural resources and implementation of industrialization strategy has focused on traditional industries instead of hi-tech  and let down agriculture, tourism and services.
Vietnam’s tourist strengths have not been fully aware of in an overall brand name connectivity to locate Vietnamese tourism’s ranking.
Deputy Minister of Culture, Sports and Tourism Vuong Duy Bien agreed that the two region’s tourism has not developed appropriately with potentials and expectation and yet to create outstanding international brand names.
Tourism development has been unequal among provinces. In 2016, there were 6.4 million international visitors to the area. Of the number,  the south central coastal region received most with 4.41 million people, north central region welcomed 1.48 million and the Central Highlands saw only 0.55 million.
Tourist development has faced many problems, requiring a change as well as regional and international competitiveness improvement, said Mr. Bien.
Dr. Tran Du Lich said that tourist investment had been scattering in localities. So he proposed to choose major places to build brand names instead of investing a few billions of dong on tourism in each province every year.
He also pointed out problems in tourist development priorities. Specifically, investing in industries is now exempt from land rent while investing in tourism must pay the rent fully. Electricity prices for tourism and services are high to cover losses for steel and cement production. This discrimination has made tourism not a key field.
Deputy Prime Minister Vu Duc Dam admitted many problems in tourist development such as visa related procedures, airport and expressway infrastructure and tourist environment.
Deputy PM Dam said that tourist development needs specific actions to make the industry a real spearhead, significantly contributing to the country’s development. Regional connectivity should go in depth instead of formality. 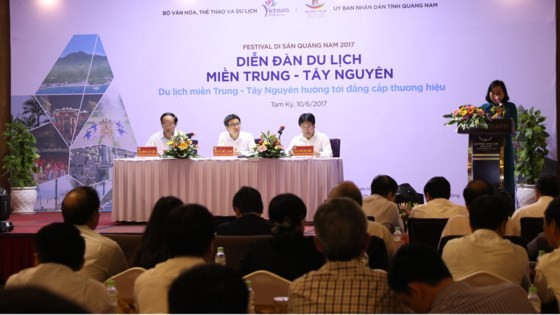 A view of the forum in Tam Ky city on June 10 (Photo: SGGP)
The central region and the Central Highlands have many unique and diversified cultural characteristics, which localities should take advantage of to create their own tourist products to attract visitors.
Beside state budget assistances, provinces need to mobilize resources from private firms to develop tourism. Human resource training should attach to businesses’ demand, he added.