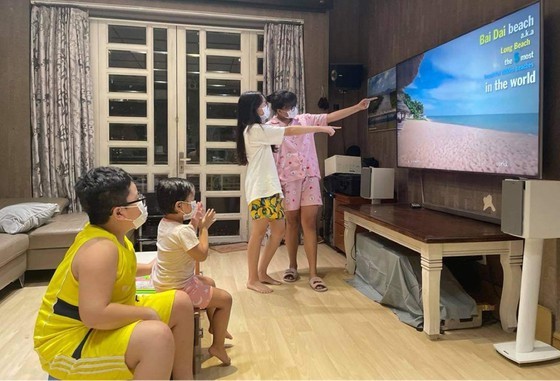 Children watch the country's landscape on TV (Photo: SGGP)
This new tourism type is expected to go hand in hand with traditional tourism products shortly even when the epidemic is repelled.

Digital tourism refers to how we use digital tools to organize, manage and even enjoy the travel experience. Digital tourism, therefore, uses all of the tools of digital transformation to change how we travel and how the sector itself operates
Before going on long trips, tourists have the habit of researching information in advance, surveying the destination to see what is impressive. This helps visitors add knowledge as well as fun to each route.
Resident Le Hong Ngat, living in Tan Thoi Hiep Ward, District 12A said that a few months ago, she promised to take her 6-year-old daughter to see water puppet shows and experience skiing, but the epidemic broke out, so she broke the promise. After that, she also found a funny water puppet show recorded by a tourist cultural park; her baby watched voraciously showing the excitement.
Recently, the family of resident Phuong Viet Quan in Le Van Sy Street in District 3 gathered to see Ha Long Bay in the Northern Province of Quang Ninh, Trang An landscape in the Northern Province of Ninh Binh, Ban Gioc waterfall in Cao Bang Province, Co Tien Twin Mountain in Quan Ba Twin Mountain in Ha Giang Province on TV.
Phuong Viet Quan said that children kept at home easily get bored and inactive, so the family watched the landscape in the country through television.
A program show "Vietnam: Go to love!" on YouTube displays the country’s beautiful scenery. Moreover, hundreds of attractions, museums, cultural heritages in Ho Chi Minh City are easy to access as they are digitized by 360, 3D image interfaces, virtual reality technology.
Mr. Quan has just searched the internet to guide his 8-year-old son to find the Saigon Zoo and Botanical Garden, the Ho Chi Minh City Post Office, the Ho Chi Minh City Opera House, and such. His children are excited and excited to interact with them.
Tu Quy Thanh, Director of Federal Travel, assessed that the demand for audiovisual and entertainment during the epidemic season is very high because people stay at home when they are socially distanced. Tourism channels, funny and useful tourism images help people have more motivation, resulting in a good mood.
Although it is difficult to replace the traditional tourism channel, virtual tourism is interesting at this time, said Mr. Thanh.
According to the Department of Tourism of Ho Chi Minh City, the digitalization of tourism destinations is of great interest to the tourism industry and is a strategy to reach a diverse range of visitors, helping Ho Chi Minh City attract domestic as well as international tourists.
Therefore, from the beginning of 2021, the Vietnam National Administration of Tourism has promoted a campaign to promote Vietnam's tourism on social networks through the YouTube channel "Vietnam: Going to love" which has attracted more than 1 million views within one month. 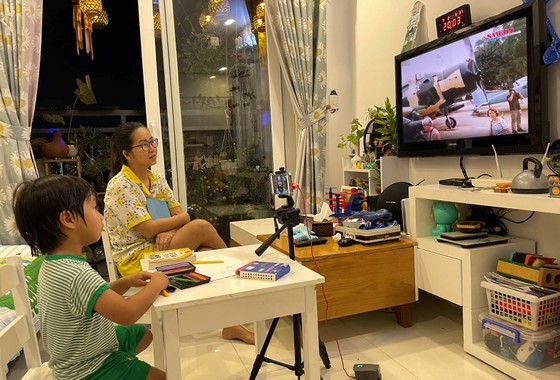 A mom and her baby together watch a program on TV (Photo: SGGP)
In addition, the Vietnam National Administration of Tourism (VNAT) cooperated with Google to exhibit online over 1,300 artistic photos of "Wonders of Vietnam" around the world. This step has been highly appreciated by travel businesses and tourists.
Currently, a series of businesses such as Saigontourist, Vietravel, TST Tourist also promote information to customers with short clips introducing the beauty of Ho Chi Minh City and the whole country.
Nguyen Minh Man, Head of Communications - Marketing Department of TST Tourist, affirmed that the company's employees still work from home during the social distancing to bring customers the best footage of the land and people as well as the cuisine of many localities across the country.
Looking at some countries in the world such as the UK, France, the Netherlands, the US, Russia, the online tourism model on the Google platform has attracted great attention from the community. For example, a free "tour" program to thousands of world-famous museums, galleries and theaters, such as the Hermitage (Russia), Museum of Modern Art, Whitney, Metropolitan (USA), British Museum (Russia) Brother)...
In fact, tourism through television and social networks has been promoting effectively in the present time. Many experts believe that this trend will accompany traditional tourism products, helping people increase their experiences and desire to explore more tourism products.