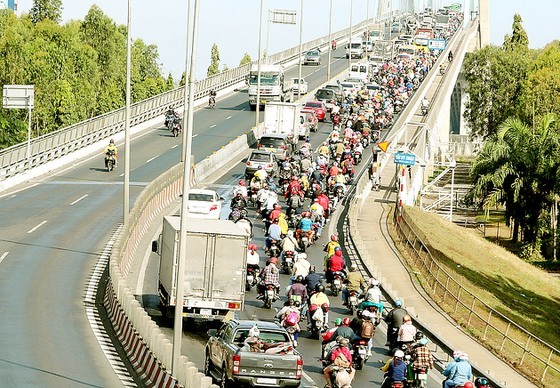 From yesterday morning, lines of vehicles were seen waiting in front of toll towers on National Highway No.1. for instance, at around 10am, hundreds of vehicles had to wait at least 40 minutes before they could pass Cam Thinh toll tower in Khanh Hoa Province.

To avoid congestions around toll towers on expressways, managers of these towers have to flexibly assign sufficient staff and prepare measures to apply such as regulating traffic flows or stopping toll collection whenever there is a sign of a potential jam forming.

As stated by the current law, managers of a toll tower can be fined up to VND40 million (approx. US$1,766) if a serious congestion is formed or up to VND70 million ($3,090) if they do not comply with directions of traffic police officers to stop collecting toll.

Lines after lines of motorcycles and coaches were slowly moving on the road from Thanh Hoa City to Hanoi. Many had to wear a raincoat to protect themselves from coldness.

Traffic congestions were reported at major gateways to Hanoi like the intersection between Phap Van – National Highway No.1A, Ring Road No.3, National Highway No.5, Thanh Tri Bridge. Traffic police officers were tasked to regulate the flows at hot spots to avoid prolonged jams.

A similar situation was seen in the Mekong Delta yesterday. In Vinh Long Province, hundreds of motorcycles, private cars, coaches, trucks were slowly heading to HCMC in lines.

At Dinh Khao Ferry Station, a large quantity of vehicles from Vinh Long Province to Ben Tre Province were waiting to be served by two 200-tonne ferries.

The congestion at the section of National Highway No.60 passing Rach Mieu Bridge was so serious that traffic police officers had to momentarily stop the direction from Tien Giang Province to Ben Tre Province several times to ease the traffic flow. Four ferries were also directed to the station there to serve heavy trucks.

Thanh Hoa Train Station reported an increase in the number of passengers compared to this time last year thanks to the fare discount policy for those booking a whole car.

Vinh Train Station informed that formal tickets for trains running from the 6th-8th of the first lunar year were all bought. 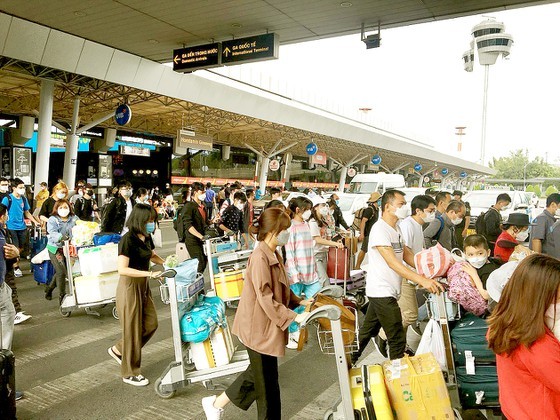 Statistics of Tan Son Nhat International Airport reveal that on February 6, the quantity of passengers to this airport reached 100,000 people. Many had to wait for a long time for a taxi from the airport even though Mai Linh Taxi Co. and Vinasun Taxi Co. said they were running at their full capacity.

On the last 2 days of Tet holiday, air fares for certain routes to HCMC rose, yet they were quickly sold out. It is exceptionally difficult to book an economy ticket on these days, and business class ones are at the price of VND6.2-10.8 million (approx. US$274-477) a ticket. That forced many people to switch to train, coach or even ask to work a few days later than regulation.

On February 6, Noi Bai International Airport served over 370 flights with around 56,000 domestic passengers, nearly a double compared to this time last year. However, no serious congestion was reported here.

To better answer the temporarily high transport demand after Tet holiday, airlines were planning to increase 100 flights to the Southern regions until February 12, mostly at the night time frame, along with 102 temporary check-in counters in T1 station and 22 security screening points to serve 4,000 visitors an hour.

In related news, the Traffic Police Department (C08) informed that during the 9 days of Tet holiday, there were more than 200 traffic accidents, including 2 serious ones happening in Gia Lai Province on February 1 and Vinh Long Province on February 2, to kill over 120 people and injure 130 travelers. This is a decrease compared to this time last year.

25,000 cases of traffic law violation were reported and handled, with the total fine of over VND25 billion ($1.1 million), among which were 1,600 cases of alcohol level violation. Thanh Hoa Province was the locality with the highest number of violators, with 200 cases.