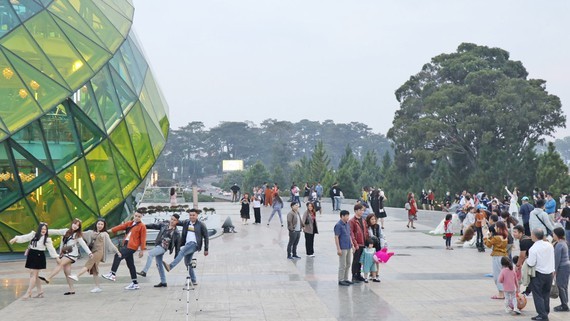 Tourists visit Lam Vien Square in Da Lat City. (Photo: SGGP)
A group of over 10 tourists form HCMC hired a car to travel to Da Lat. “We planned to visit Da Lat on Tet holidays but the trip was suspended due to the pandemic”, Ms. Minh Thu, a member of the group said.

Many visitors coming from other provinces, such as Dong Nai, Binh Duong, Ba Ria-Vung Tau, Long An, Binh Phuoc, Khanh Hoa, even northern localities and Hanoi decided to choose the flower town which is regarded as a favorite destination.
The city’s center, tourist attractions and hotels have been also gradually busy with the increase in tourist numbers. The Love Valley, one of the popular destinations in Da Lat, received more than 14,600 visitors in the first three weeks of March. Other destinations, likely Da Lat cable car, Langbiang Mountain and Datanla Falls welcomed over 100,000 people of each place.
According to travel agents, most arrivals are self-drive tourists while group tour has not yet resumed.
Deputy Director of the Department of Culture, Sport and Tourism of Lam Dong Province, Nguyen Thi Bich Ngoc said that the rise in number of tourists in recent weeks shows a good sign of recovery in the province’s tourism industry. An estimated number of arrivals to Lam Dong in March were 270,000, presenting a year on year increase of 8 percent compared to the last period and 1.02 million in the first quarter, she added.
Tourist service businesses hoped that the tourism industry might be sharply recovered if the epidemic is under control on the forthcoming public holidays, including National Reunification Day (April 30) and International Labor Day (May 1).
Mr. Pham Anh Tuan, an owner of a hotel said that his hotel has 33 rooms providing accommodation for about 100 visitors. The room occupancy rate currently is just 30 percent. It is expected to reach 80-90 percent in the upcoming holidays.
The room price will rise by up to 10-50 percent on national holidays compared to normal days, said Ms. Nguyen Thi Vinh Hanh, an owner of a homestay on Dang Thai Than Street.
According to survey, a room with one double bed in under 2-star hotel located in the city center has the price of VND700, 000-800,000 per day, and a room with two double beds costs VND1.5 million. Room price in accommodation units in the suburban area is VND500,000-VND1 million per day on peak times.
In these days, visitors have mainly contacted with hotels to ask room prices instead of taking reservation as in previous years.
Vice chairwoman of the People’s Committee of Da lat City, Tran Thi Vu Loan said that the municipal authorities usually ask hotels and tourist attractions strictly implement pandemic preventive measures to ensure the safety of travellers and the community. Tourist spots must provide visitors with hand-washing liquid and medical masks for free.
According to the provincial Department of Culture, Sport and Tourism, Lam Dong now has 2,651 accommodation providers with total rooms of 33,819. Of which, 453 hotels are ranked from one to five stars with 12,778 rooms, including 41 three to five-star hotels with 4,040 rooms.
The province has enough room capacity to satisfy the peak demand in the forthcoming holidays. In addition, the sectors of culture and health have strengthened cooperation in building detailed plans on infection prevention and control for Covid-19 to limit the entry and spread of the virus, Deputy Director of the Department of Culture, Sport and Tourism of Lam Dong Province, Nguyen Thi Bich Ngoc added. 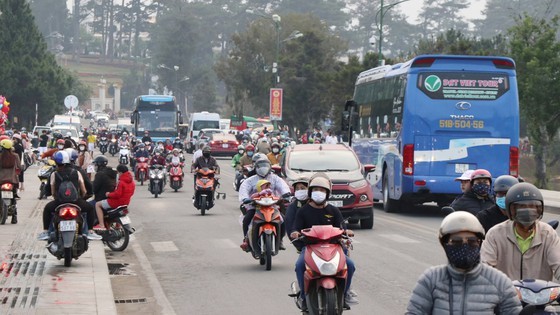 The city’s center  is gradually busy with the increase in tourist numbers. 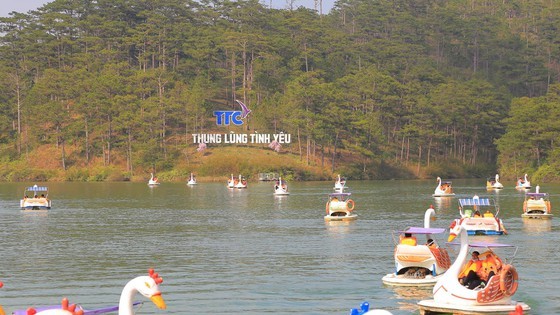 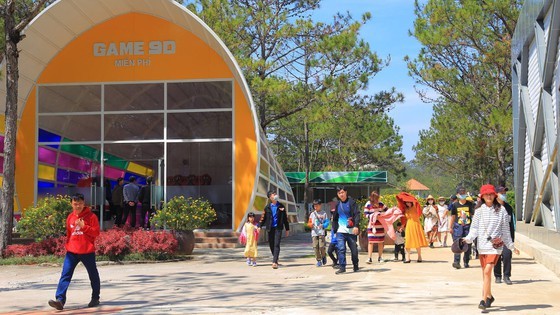 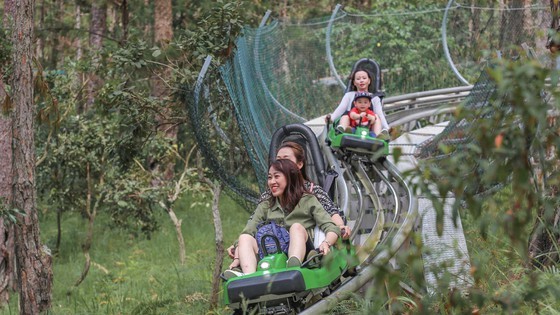