The statement was made by Director General of Tourism Marketing Department under the Viet Nam National Administration of Tourism (VNAT), Dinh Ngoc Duc in a discussion about tourism potential of Con Dao Island in the southern province of Ba Ria-Vung Tau which was organized in FLC Samson Beach & Golf Resort in Thanh Hoa Province on September 12.

Con Dao has a great potential for tourism development with a high growth in tourist arrivals and a recent increase in visitor numbers by 400 percent despite of its poor infrastructure and a few air routes, he said.

The launch of three direct air routes from the North to Con Dao is a highly anticipated event that people are hoping. However, the growth in number of visitors can cause serious impacts on the natural beauty and spirituality of the island, according to meeting participants.
Con Dao is an important national historical site with the diversified ecosystem. The State’s management units must have detailed planning on the development of tourism infrastructure tied to the preservation and conservation, said Director General of VNAT's Tourism Marketing Department.
Regarding to the reason why the runway extension project of Con Dao Airport is not implemented, Deputy chief of the Civil Aviation Authority of Vietnam (CAAV) Vo Huy Cuong said that long-term environmental impacts may occur during project execution phases.
Ba Ria-Vung Tau Province is expecting to attract investment in 65 tourism projects in Con Dao National Park. The provincial authorities committed that the development of projects have been considered cautiously to ensure the sustainable tourism development that respects the island’s ecosystem, said Director of the province’s Department of Tourism, Trinh Hang.
Con Dao received around 420,000 visitors in 2019 and more than 235,000 travelers in the first 8 months of this yea in spite of the COVID-19 pandemic. The island expects to draw investment in tourism infrastructure and developing ecotourism products, according to the province's leader.
A one-way flight ticket for he direct route between Hanoi and Con Dao is VND2 million (US$83.3), not including taxes and fees; while a return flight costs VND5.5 million (US$229), including taxes and fees.
The 16-island archipelago Con Dao located around 180 km off Vung Tau City in Ba Ria - Vung Tau Province, about 230 kilometers southeast of HCMC. It is well known for nice wild beaches with white sand, deep blue water and colorful coral reefs. French colonialists and the American turned the island into a prison to jail Vietnamese revolutionary soldiers in the wartime. The offshore relic has attracted many local and foreign visitors in recent years.
The island ,also known as Con Dao National park was recognized the world Ramsar site as it has satisfied criteria for identifying Wetlands of International Importance.
The National Park covering some 14,000 ha of Ba Ria – Vung Tau Province in the South includes a part of the archipelago and the surrounding sea and is home to 144 species, including rare and endangered animal, such as sea turtles.
One of must-visit attraction in Con Dao is Hang Duong cemetery where holds 22,000 graves of martyrs. Many visitors and locals come here to offer incenses to pay tribute to fallen soldiers and pray for their lives and the country. Therefore, Con Dao's spiritual tourism is one of the key tourist products in the province’s tourism industry. 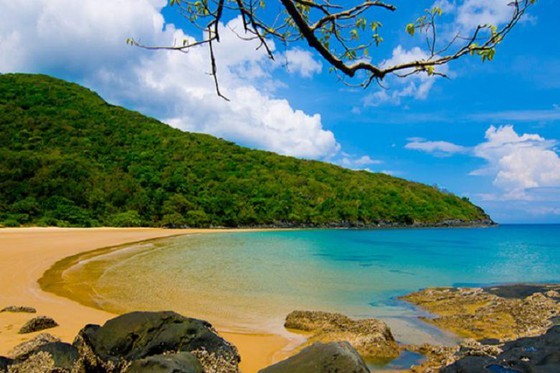