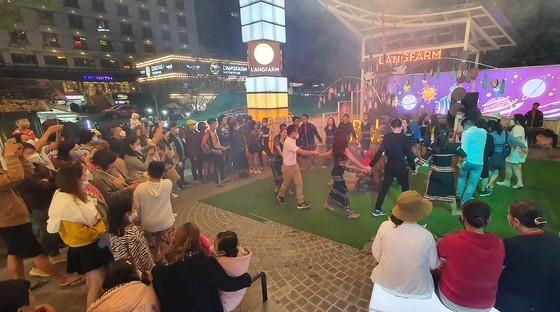 According to Director of the Center for Conservation of Hue Monuments Hoang Viet Trung, from mid-March until now, as the travel demand of domestic and foreign tourists has increased sharply, the center has performed embellishment of landscape and organized many cultural and art activities.
In Da Nang City, entertainment parks and tourist sites are crowded with travelers as before the Covid-19 pandemic. The number of foreign tourists flocking to Than Tai Mountain Hot Spring Park has increased sharply.

Director of Da Nang Department of Tourism Truong Thi Hong Hanh predicted that the city would receive a large number of tourists this summer.

It is expected that Khanh Hoa Province will receive about 700,000 visitors this month. To serve the numerous arrivals, the local tourist sites are ready for measures to ensure the safety of visitors.

Through surveys, hotel occupancy in Binh Thuan Province and Da Lat City has reached around 70 percent on weekdays. It is full at the weekend.

By the end of May, Ba Ria-Vung Tau Province welcomed more than 5.6 million visitors. From the beginning of this month, room occupancy on an ordinary day reaches around 65 percent to 80 percent and it is almost full on the weekends. The provincial Department of Tourism has requested districts and Vung Tau city to strengthen the management of commodity prices and arrange more human resources to ensure the safety of tourists.