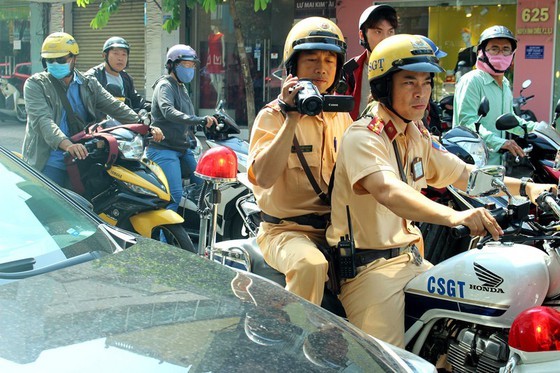 Traffic police increase patrols on roads
Specifically, traffic police force nationwide will mobilize all officers and arrange patrol forces to control and strictly handle violations of traffic safety with concentration on roads with high-risk of accidents, during hours which accidents often occur and the “accident blackspot " where road traffic accidents have historically been concentrated. Moreover, police officers will work in full compliance with the Ministry of Public Security’s direction on patrol and handling of violations according to the theme "Driver on the road under influence of drugs violating regulations”.

Police officers will handle violations relating to overloading, oversized vehicles; plus, they will maximally exploit the surveillance camera system to impose punishment on violators.

Over the past time, illegal motorbike race has developed complicatedly. The Traffic Police Department required police in provinces and cities to evaluate and learn lessons from the implementation of the Ministry of Public Security's plan on preventing and combating illegal racing. Additionally, police officers must well understand the situation, and assume responsibilities of their units. On that basis, more police officers will be assigned their duties with the aim to prevent the gathering of illegal racing, swinging and re-occurrence of security disorder.

Traffic police ensure the traffic safety and safety of railway and inland waterways meanwhile they also actively coordinate with local authorities, police, and the railway and waterway sectors to inspect, control and handle violations which is the cause of railway traffic accidents, waterways.

Through patrol, control and coordination with police units, traffic wardens detect and arrest all kinds of criminals comprising robbers; drug traffickers; firecrackers, explosives, illegal weapons smugglers as well as seize goods without invoices. Last but not least, traffic police officers promptly detect the illegal trade of Vietnamese or discover illegal immigration of foreigners into Vietnam on land, railway or waterway.