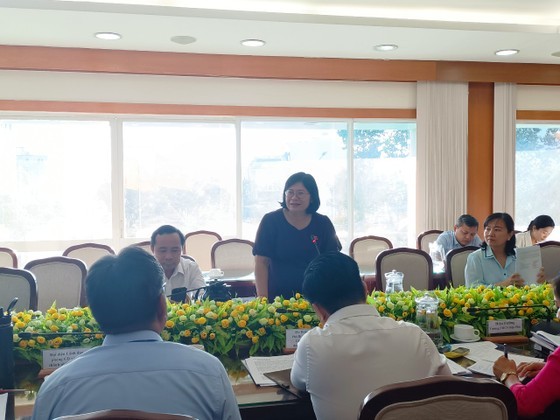 This afternoon, the Ho Chi Minh City National Assembly deputies delegation led by Ms. Van Thi Bach Tuyet, Deputy Head of the delegation, had a working session with Thu Duc City People's Committee on supervising the implementation of the National Assembly’s Resolution No. 88/ 2014 and Resolution No. 51/2017 on the renovation of general education curricula and textbooks in Ho Chi Minh City.

Ms. Van Thi Bach Tuyet said that the renovation of programs and textbooks is an issue that has attracted great public attention.

Recently, the National Assembly Standing Committee approved a thematic plan to monitor the implementation of renovation of general education curricula and textbooks nationwide from now until the end of 2023.

Speaking at the meeting, Mr. Nguyen Anh Phong, Deputy Head of the Department of Education and Training of Thu Duc City, said that eye-catching textbooks in the 2018 General Education Program all have beautiful images and designs.

Worse, many schools still lack teachers in the subjects of music, fine arts, physical education, English, and informatics. For example, Principal Nguyen Thi Hong An of Hiep Phu Secondary School said that every year, the school plans to recruit teachers for state payroll, but it failed to employ teachers as per its quota.

In order to solve the problem of teacher shortage in the short -term, schools contacted other schools in the city to select a team of teachers who have been trained in the General Education Program 2018 to work as visiting teachers.

Particularly for integrated subjects in grades 6 and 7, Ms. Nguyen Thi Hong An said that the shortage of teachers makes it difficult to implement the subjects. Similarly, Principal Pham Thi Muoi of Linh Dong Primary School informed that the school still lacks 6 teachers in the subjects of English, informatics, physical education, music and fine arts.

Every year, many teachers quit their jobs whereas schools lack teachers for special subjects.

Hence, Principal Pham Thi Muoi mentioned staff retention which is raising many concerns in the context of teachers' limited income. She proposed the People's Council of Ho Chi Minh City and People's Committees at all levels to raise teachers’ income in order to attract teachers who are enthusiastic, and committed to the profession, and attract young graduates to apply for public servants in the education sector, especially teachers of English and informatics.