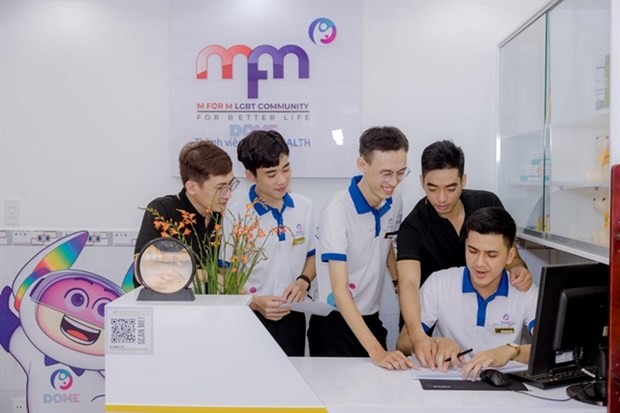 M For M shop located in HCMC's Tan Phu district, one of the first six shops with health services for HIV prevention and treatment, is being piloted under the community one-stop-shop model called DOME. (Photo courtesy of LIFE)

Phan Thi Thu Huong, head of the Vietnam Administration for HIV/AIDS Control (VAAC), said that at a workshop on reviewing the PrEP programme for HIV prevention held in Ho Chi Minh City on October 26.

Since 2017, providing PrEP service has been expanded in 29 provinces and cities across the country, with 206 PrEP service providers, of which 49 are private.

About 80 per cent of the people using PrEP in the country are men having sex with men (MSM). And 7 percent of PrEP customers are young people aged 20-34.

“This is considered as one of the effective measures to help curb the increase in HIV/AIDS infections in the MSM community,” she said.

Many models and initiatives in consulting, approaching, introducing and providing PrEP services have been deployed across the country such as PrEP provided directly at public health facilities and public outpatient and private clinics, one-stop shop health services, and mobile PrEP services.

“Diversified models make conveniences in access to use the service, especially for young customers, helping to reduce stigma and discrimination towards people living with HIV,” she said.

They are also providing comprehensive HIV/AIDS prevention services, especially to vulnerable and high-risk groups, contributing to the control goals outlined in the National Strategy to End AIDS by 2030, she said.

The strategy aims to boost coverage of HIV/AIDS prevention and treatment services for key population groups, and have 72,000 customers receiving PrEP services by the end of 2025.

However, there are still shortcomings and difficulties that require more drastic solutions in the coming time, she said.

Among them, raising awareness about PrEP among target groups, and opening services in provinces and cities with high infection rates among MSM are needed.

It also needs to create better connections between community-based organisations and PrEP providers.

Recently, the remote PrEP service delivery model (Tele PrEP) has been approved by the Ministry of Health to be piloted in 20 health facilities in seven provinces and cities.

Towards providing fast and convenient services, Tele PrEP is appropriate and confidential for customers at high risk of HIV infection, especially young customers.

It also opens up opportunities to access PrEP services for customers living and working in provinces without PrEP providers.

According to VAAC, the number of new HIV infections is increasing among MSM. Every year there are about 10,000 - 13,000 new HIV cases, mainly young people aged 20 to under 40.

Research results of Hanoi Medical University showed that if there is no prevention measure, seven out of 100 people who are MSM will be infected with HIV each year.