In its five-year plan, the Thai retailer will focus on expanding multi-concept penetration to build its presence across the country including suburban and rural areas as well as build brands in the food category for enhanced customer experience and brands in non-food categories, and develop the omnichannel platform, said Philippe Broianigo, CEO of Central Retail Vietnam. 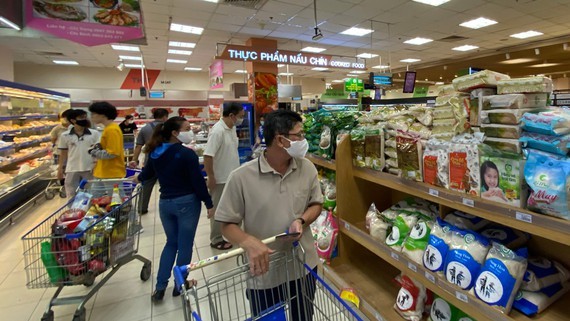 Customers are buying commodities in a supermarket in HCMC (Photo: SGGP)
In addition to expanding businesses across Vietnam, Central Retail also aims to enhance the customer experience through the development of its omnichannel platform including online sales channels such as Nguyenkim.com and Supersports.com.vn; e-commerce platforms such as Alibaba-owned online marketplace Lazada, Shopee and TIKI; quick commerce such as ride-hailing firm Grab, Chopp, Now.vn. and Baemin; social commerce (Chat & Shop) such as Zalo; as well as “Hotline” and “Click and Drive” services.

Last but not least, it will change 15 Big C to eight GO! hypermarkets and seven to Tops Markets, and further diversify its non-food business.

In 2020, Big C developed omnichannel services in response to the Covid-19 crisis with a 5 percent sales contribution at the end of 2020 whereas it is zero percent at the beginning of the year. In 2020, CRC opened four GO! Malls in the Mekong Delta provinces of Tra Vinh and Ben Tre, the Central Province of Quang Ngai, the Central Highlands City of Buon Ma Thuot.

Furthermore, it rebranded Big C to GO! adding five more branches, while opening the first branch of GO! Supermarket in the Central Province of Quang Nam to serve customers in the rural area.

After nine-year operation, the company has opened 37 shopping centers and 230 stores with total area of 1,000,000 square meters across 39 provinces nationwide, receiving an average of 175,000 customers per day.

According to the company, Vietnam’s service sector posted a 2.34 percent growth, led by wholesale and retail trade with a 7 percent increase compared to the same period last year, contributing 33.5 percent to the economy. It is also expected that the service sector will continue to grow steadily in 2021.

Vietnam’s service sector is forecast to fast develop in 2021 helping to push Vietnam into one of fastest growing and most lucrative markets in the world.

HCMC will carry out a healthcare work monitoring program at city-based schools in 2023 from February to April.