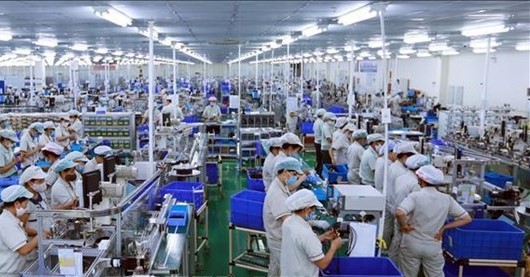 The author, Guy Mettan, wrote that the world is seeing the emergence of Vietnam and Indonesia as rising economic powers in Asia.

According to him, Vietnam may be the country that benefits the most from the new international situation. From January to July, foreign direct investment (FDI) poured into the country was estimated at US$11.57 billion , up 10.2 percent year-on-year - the highest amount in the last five years.

The author also cited the World Bank’s August projections as saying that Vietnam’s GDP growth may hit 7.5 percent in 2022, and inflation curbed at 3.8 percent this year.

According to Fitch, Vietnam ranks fifth out of the 35 Asian markets in terms of economic openness, with a score of 74.6 out of 100, far above the Asian average (46) and the world average (49.5).

“The country is emerging as a manufacturing hub in the East and Southeast Asian region, supported by government-led economic liberalisation efforts and integration into global supply chains, through trade agreements and membership of regional and international blocs,” the article wrote. In Asia, Vietnam followed Singapore, China’s Hong Kong and Macau, and Malaysia. Globally, it ranks 20th out of the 201 markets.

In July, Moody's raised its GDP growth forecast to 8.5 percent, the highest growth projection in the Asia-Pacific region. The Growth Lab of US-based Harvard University recently forecast that Vietnam could be one of the fastest growing countries over the next decade.

The Swiss newspaper also appreciated Vietnam’s candidacy to the United Nations Human Rights Council after successfully assuming the role of a non-permanent member of the UN Security Council in 2020-2021.