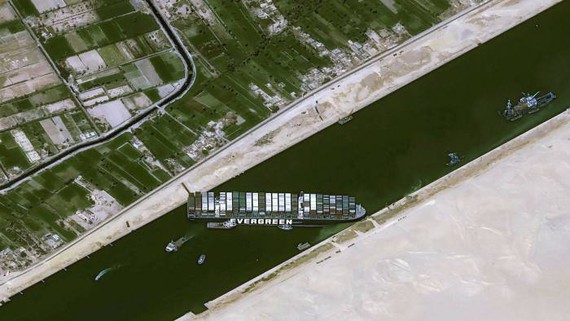 Fears of significant disruption to global trade have risen after rescuers warned that the Suez Canal could remain blocked for “weeks” by the grounding of a giant container ship.

Specialist dredgers arrived on Thursday to attempt to dig out and refloat the 220,000-tonne Ever Given after it became wedged across the canal during a sandstorm on Tuesday. Despite efforts to move the ship, as at 5pm London time satellite tracking showed the vessel was still stuck across the canal.

Bernhard Schulte Shipmanagement, the technical manager of the Ever Given, said an attempt to refloat the vessel in the morning had been unsuccessful, with another planned later.

Dutch shipping services provider Boskalis, which own Smit Salvage, a group involved in the rescue effort, likened the operation to trying to free a beached whale. “The more secure the ship is, the longer an operation will take,” Peter Berdowski, chief executive of Boskalis, told the Netherlands’ Nieuwsuur television programme on Wednesday. “It can take days to weeks. Bringing in all the equipment we need, that’s not around the corner.”

The 400m long Ever Given, operated by Taiwan-based Evergreen Marine, is one of the world’s largest container ships and is weighed down by thousands of tonnes of cargo, with its position suggesting its bow and stern are wedged on the shallower banks of the canal edge at the southern end.

While salvage experts hope higher tides may help release the vessel if the dredgers can remove enough sand and soil, fears are growing that refloating the Ever Given may prove more complex.

Salvage companies may need to remove fuel from the ship’s tanks to help lighten the vessel and consider offloading some of its containers — an arduous task given the relatively remote location, sheer height of the ship and lack of infrastructure on the ground.

Ranjith Raja, an analyst with financial services data firm Refinitiv, said more than 206 ships were waiting on either side of the canal to transit. The number has roughly doubled in the past 24 hours.

The first vessels appeared to start turning away from Suez and towards the Cape of Good Hope late on Thursday, including the Ever Greet cargo ship — a sister vessel of the Ever Given.

John Glen, an economist at the Chartered Institute of Procurement & Supply, said a prolonged shutdown of the canal risked severe disruption to supply chains.

“If goods have to be rerouted via Africa due to the blockage this could add as much as 10 days to delivery times for UK businesses,” Glen said. “If this does happen it will inevitably lead to shortages of goods and inflationary price rises for consumers.”

A UK government spokesperson said there was a risk that some goods “may be delayed” in transit.

Oil prices have taken some support from the blockage as long lines of tankers wait to pass, though traders said there was no immediate concern about supply shortages. Brent crude, the international benchmark, shed some of Wednesday’s gains to trade near US$61 a barrel on Thursday.

The Suez Canal in numbers 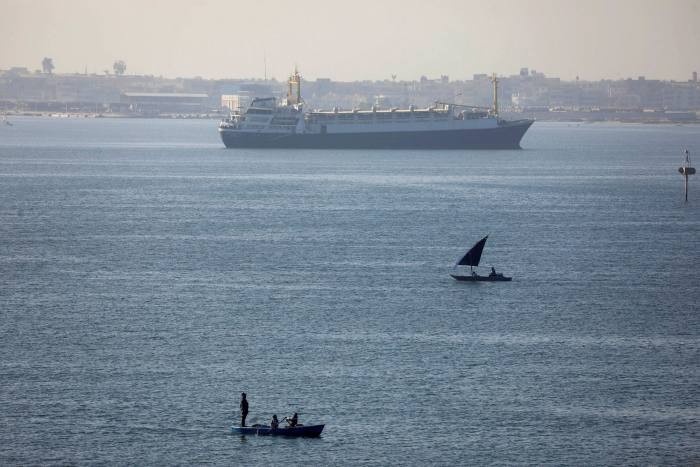 Bulk carriers account for almost 30% of traffic, container ships 25% and tankers for 15% of transits

Wood Mackenzie, an energy consultancy, said that while the largest impact was on container shipping — which made up about 50 per cent of the vessels transiting the canal in February — at least 16 laden crude oil and refined fuel tankers had been held up. About 25 per cent of global container trade volumes move via the Suez Canal, according to Container Trades Statistics.

The Suez Canal Authority indicated that its own expectations for refloating the vessel had been extended.

It said it had let 13 vessels traverse the northern end of the canal on Wednesday, but that those vessels would now need to drop anchor, with all further navigation suspended.

Most large container liners have not yet decided whether to reroute vessels around the Cape of Good Hope or use air freight for time-sensitive cargo but are working frantically to reorganise schedules should the vessel remain stuck.

Evergreen said in an emailed statement that because the Panama-flagged ship is leased, its salvaging and any third-party liability were the responsibility of the ship owner, Shoei Kisen Kaisha of Japan.

Insurance experts predict a wave of claims stemming from the blockage, though estimates are uncertain. David Smith, head of hull and marine liabilities at insurance broker McGill and Partners, said the final bill for the incident was likely to exceed US$100m including compensation for delays, loss of revenue for the SCA, damage to cargo and the cost of refloating the ship.

The Ever Given’s professional and indemnity cover is provided by UK P&I Club, a mutual insurer for shipowners, which said it was not “appropriate” to comment on potential claims.

Questions have been raised, however, over whether the growth in size of modern cargo ships poses unforeseen risks in the relatively narrow chokepoints such as the Suez Canal.

According to Evert Lataire, head of the Marine Technology Division at Ghent University in Belgium, satellite tracking suggests the ship could have also been shoved across the canal by the so-called “bank effect” in which a vessel travelling too close to the side of a river or canal is twisted away from it by pressure differentials in the water.

The effect is greater for larger hulls; the Ever Given is one of the largest ships in the world, part of a group of “ultra large container ships’ that are too wide to pass through the Panama Canal.

The vessel, which launched just three years ago, also badly damaged a ferry boat in Hamburg in 2019 when passing close to a ferry dock.